It seems like Telltale Games has been releasing all kinds of games lately — so many that it’s hard to choose which one to play first. While I have big plans for their take on Game of Thrones, I couldn’t wait to play the first episode in their Tales from the Borderlands series. 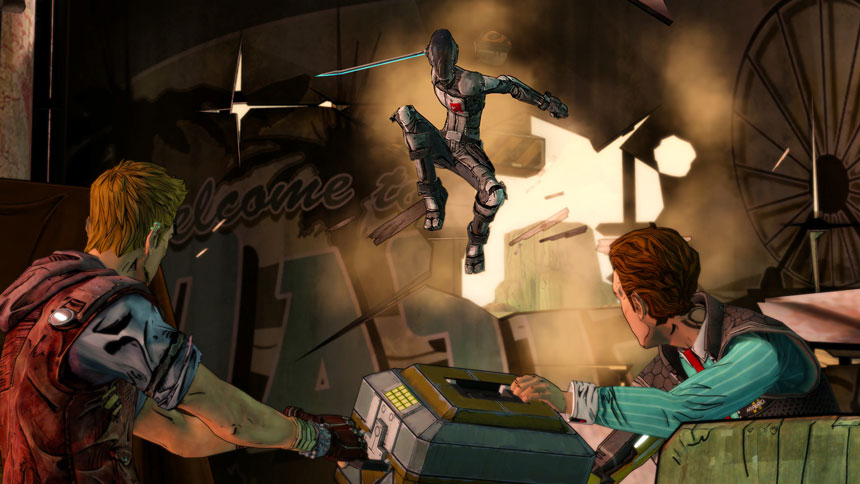 Based on Gearbox’s Borderlands video games, this Telltale Games entry has been on my most-anticipated list since I first heard about it. Maybe it’s because I already knew I loved the gritty, sci-fi worldbuilding that’s like a slightly unhinged partner to Joss Whedon’s Firefly. I was looking forward to spending more time in this rundown world of guns and psychos, and Telltale’s knack for storytelling could only make the experience even richer. (Minor spoilers to come.)

The first episode “Zer0 Sum” starts out in a dusty middle-of-nowhere, with the protagonist Rhys being tied up to tell his story of what-just-went-down — and then you’re living it. Later, a second protagonist, Fiona, is introduced to tell her side of the same story. It’s a framing device that works well for showing off just how tight Telltale’s storytelling can be. There’s also a lot of humor in understanding realizing that some of your assumptions about the story were off when you hear the second side.

Now for the first story. Rhys works for Hyperion Corporation and is due for a promotion. But instead of the meeting he expected, he’s demoted to “senior vice janitor” by his fast-talking nemesis Vasquez, voiced by Patrick Warburton. (Hearing Warburton’s hilariously recognizable voice instantly made my sister and I burst out laughing — he’s a great choice to play this jerk of a character.) This inspires Rhys to take on a new mission in life: To screw over Vasquez. To do this, he and his friend (also a Hyperion employee) steal $10 million from the company to purchase a vault key Vasquez has been after.

The second protagonist is Fiona, a con artist thief living with her sister and father-figure mentor in a seedy Pandoran town. She and her makeshift family are involved in a big con: Selling a fake vault key for $10 million. See how their stories intersect?

The character development is some of the strongest I’ve seen in a Telltale game. As a sarcastic, uptight corporate sellout, Rhys sparks when he’s forced to work with Fiona and her free spirit sister. Personalities naturally clash, hilarious bickering ensues, and everything feels as authentic as it is entertaining. 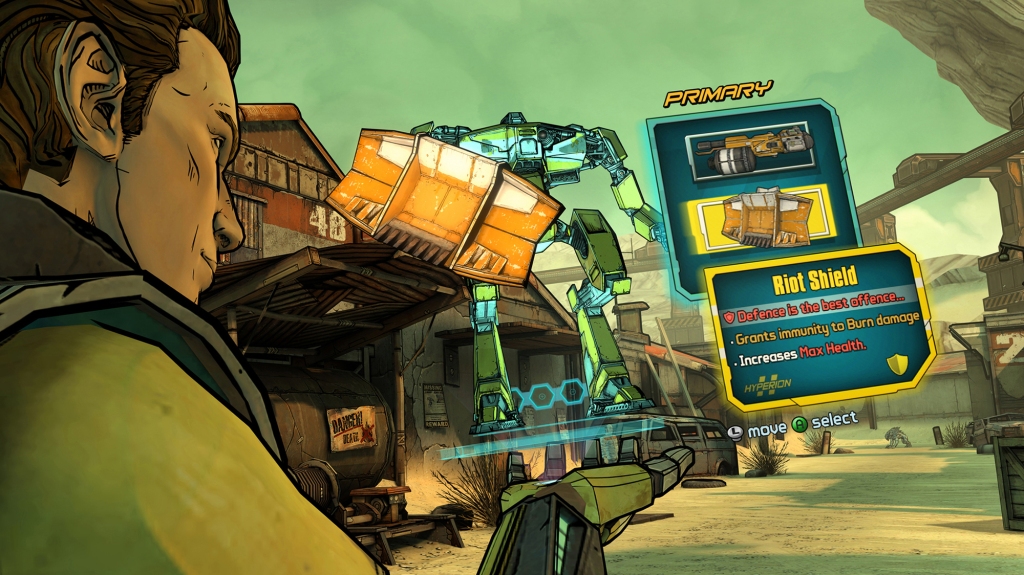 Like all Telltale Games, the story is presented in cinematic style. As the player, you choose dialogue options, move around to investigate during certain sequences, and occasionally engage in quick time events when it’s time for action. I thought this worked well for The Wolf Among Us series — still my favorite from Telltale — because this minimalist style of gameplay was used to investigate crimes. In Tales from the Borderlands, it’s used with a much freer sense of humor. Like for controlling a poetic combat robot. And hitting bandits with a shockstick. And exploring a creepy museum of deceased humans who are stuffed taxidermy-style. Additionally, Rhys has a special ability called Echo-Eye, which utilizes his cybernetic eye to download data about objects and people (and, like, hack into Vasquez’s computer and stuff).

I don’t know if it’s just me, but I found the QTE action in Tales from the Borderlands to be much easier than in other Telltale Games. It’s almost like the aiming system has been made more forgiving, however subtly. Or maybe it’s just the way the action scenes are set up. Combat feels more electrifying and fun in this game than in past Telltale adventures, and the more traditional melee/shooter combat you find in the Gearbox games has a natural home here. There’s even combat on moving vehicles toward the end of the episode, which had my heart racing even though it was easy to act out.

Although it’s perfectly possible to play this game with no prior knowledge of the Borderlands series of video games, you’ll appreciate it somewhat more if you’re a fan. References to Handsome Jack, being behind the scenes at Hyperion, the stylized character intros, and exploring more of Pandora give the game a special buzz if you’re already familiar with the series. Plus, Zer0 is there for a few scenes. I was most excited to hear some of the music from the main games; I listen to the Borderlands 2 soundtrack all the time and was happy to be reminded that this game was whisking me back to Pandora.

What I like most about this game is that it keeps with the spirit of the Borderlands series. I’ve always found the Telltale Games to be a little on the serious side — I mean, you never know who’s going to die and when you’re going to have to be the one to pull the trigger. However, Tales from the Borderlands is finally showing off Telltale’s comedic side. It’s the first Telltale game to make me laugh out loud from start to finish.

Some of the game’s humor also comes from its twists on traditional Telltale gameplay. If you’ve played the studio’s games before, you probably know how often they give you tough moral choices; in the first episode of The Walking Dead, for instance, two friends are in danger and you only have time to save one — who do you choose?

However, Tales from the Borderlands skips the super-serious paths in favor of satire. Some of the choices are completely sarcastic, almost as if the game is poking fun of the traditional Telltale storytelling. Additionally, some of the hints that appear in the upper left corner, which usually tell you that something you’ve just said or done will have an effect down the road, are now just another place for Telltale to tell jokes. And what’s best about all this humor is that it brings back to life the free spirit of the Borderlands games — it just totally fits.

4 thoughts on “Telltale’s Most Energetic Episode Ever: “Zer0 Sum” Review”