Having finished the Gears of War series last year, lately I’ve been daydreaming about the next Gears game. It’s going to be pretty different than what we’re used to, simply because the characters are changing. But from what I can see, it might just retain the same gritty spark that makes the series so entertaining and feel so good to play.

As a fan of the games, the first thing I want to know is whether the gameplay is going to play the same. There are a lot of little mechanics and features that make Gears of War feel like… well, Gears of War. 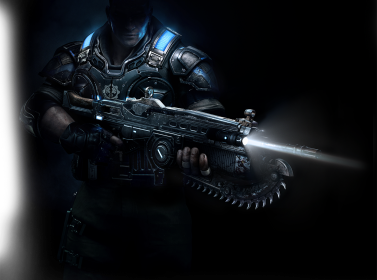 The E3 gameplay preview is quick to show off the protagonist, JD, holding the series’ iconic lancer assault rifle. Fans will know this weapon features a chainsaw along the bottom that can be revved up for melee combat. Pressing and holding the “B” button puts it into action, as usual.

Overall the mechanics look like traditional Gears. You use the D-pad to swap weapons, press “A” to roll in and out of cover, and press “Y” to look at a point of interest. The interface is somewhat updated here; icons appear at the bottom of the screen that look different than before or are entirely new. It’s some minor polish to the interface that looks good; the mechanics haven’t changed, which is the important thing.

There may be a few new things to consider, though. For instance, the preview shows JD revving up his lancer to cut through a gate. This could indicate new interactions with the environment, which would be cool.

I also noticed persistent gore making a nice debut. When JD pops a pod, the glowing goo stays on him for about a minute while he continues on his way, gradually evaporating. To be honest, I don’t remember how gore looked in past games, but this is something that stood out to me when I watched the preview.

As for the story, the preview shows two new characters, JD and Kait. Let me just predict this right now, guys (though it sounds like it’s a common theory): JD looks like Baird, and Kait looks like Sam. Are they siblings and the children of Baird and Sam from Gears of War 3?! In any case, they are in COG armor, which means the Gears must have been reinstated or something.

The enemies also seem new. Rather then the traditional Locust of the previous games’ war, JD and Kait are up against creatures who seem more like animals than armored aliens. At least, in the courtyard battle shown in the preview, the enemy is a creature on all fours with a thick tail, three-piece jaw, and tentacles inside its mouth. It screeches and roars rather than speaks. (No more of the enemy whispering, “Grenade!” when they get one thrown at them, I guess.)

The characters mention that they’re the hunters becoming the hunted, which seems to imply they’re hunting down these enemy creatures. The game’s mood feels very foreboding even compared to past Gears games – less militaristic and more horror suspense. JD and Kait move around creepy, crumbling castle using flashlights. It feels like the enemy could be anywhere.

Interestingly, the world looks pretty destructable to me. There’s a lot of movement in the gameplay preview, as you see this dark post-apocalyptic landscape in a storm. The wind whips the trees around and causes parts of the building to crash around the characters. It looks very alive, and the graphics are incredible.

As for the details, Gears of War 4 is set to be an Xbox One exclusive (not coming to Xbox 360). It’s set for a fall/holiday season launch, which a multiplayer beta coming out this spring/summer. Splitscreen couch co-op is rumored to be making a return (take that, Halo 5!), but keep in mind the only source seems to be this GrabIt Magazine article referencing an unnamed Coalition representative saying this offhand at E3. In any case, I’m excited to see two characters here, indicating that the Gears co-op experience is alive and well.

If you haven’t seen it yet, here’s the full E3 gameplay preview!