This year I was excited to be able to attend the E3 video game expo in Los Angeles for my job. Typically I like to keep my work very separate from my blog here; since Robo♥beat contains my personal opinions, I don’t want that getting mixed up with the video games I work with in any way. However, this seems like a great opportunity to talk about all of the things I saw and games I got to play when I had some free time at the convention. 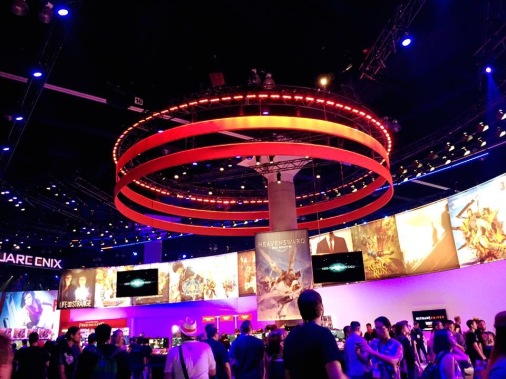 First off, let me just say that I wanted to play Halo 5 like nobody’s business. But it didn’t happen. The first two days I was there, I only had a couple hours at a time, and the lines were already cut off for the day.

When I went for a full day on Thursday, I arrived right on time to jump in line. I thought I would be the first one (or close to it), but that is pretty hilarious in retrospect. When I zoomed into the convention, the line for Halo 5 was already around the corner of the Xbox area, and when I asked up front about it, they said it would be four hours. I had way too much else I wanted to see to spend over half the day in line for one game. Unfortunately, when I checked back later, the line was closed for the day. So I totally missed out.

I did get to play The Taken King, the new Destiny expansion. However, I don’t even know what to say about it here, because I don’t play Destiny. I enjoyed the beta a lot, but I never bothered purchasing the game because I didn’t have anybody to play with. (I’m not that into online matchmaking.) The result was that playing the The Taken King at E3, I honestly didn’t know what was going on. I will say that the game looked amazing. And eavesdropping on some Destiny fans who came out of the demo, I know they were extremely excited about it.

There were a few other games I was interested in — namely XCOM 2, Adrift, Rise of the Tomb Raider, and ABZU. However, other things kept me occupied, and I didn’t have quite enough time at the expo to stand in line for everything (or even find everything–still don’t know where that ABZU was hiding).

Still, I got to try some pretty cool stuff.

I counted three different Star Wars Battlefront demo areas around E3, which was awesome. It meant lines were not as crazy as they could have been, and probably a whole lot of people there got a chance to play. They had both co-op and multiplayer available, and you could pick what you wanted.

I played co-op and had a really good time shooting waves of Stormtroopers. You’re supposed to defend pods from the waves of enemies. I tried a couple different weapons, one being a rifle, and found that setting yourself up to snipe can definitely come in handy. The map was in the Tatooine desert, so I spent a lot of time running along the cliffs trying to spot the Stormtroopers below.

The game looks great, and I can say the co-op seems like it’s going to be a blast. The only thing I was a little surprised about was how simple the game felt. It was very much like any other co-op FPS experience, but this time in the Star Wars world. However, considering the demo didn’t show off all of the gameplay variety we’ve seen in trailers, I’m sure there is more to look forward to.

Guitar Hero Live brings a couple new things to the stage: a new “live” concert look, and a new guitar. The crowd looks real, and the camera pans around so you can see your bandmates playing. They’ll even react to what you do — mess up or get boo’d offstage, and they’ll look upset. (I definitely know what that looks like from my time with the demo.)

But what really interested me were the new controls. You still strum and can get some vibrato going, but instead of the four buttons to play notes, you now have six, essentially. The guitar looks a little more realistic now, like it has a real fretboard. There are six buttons in two rows, so it’s like having two strings — an upper and a lower. Sometimes you have to press both at once. It takes some getting used to if you are accustomed to the old guitar in previous Guitar Hero games; I heard other big fans of the series saying they missed a bunch of notes at the beginning just getting the hang of it. The new set-up really isn’t that tricky — just different. I felt like I finally did okay in the last 30 seconds of my Killers song. I like that the guitar is more realistic, although I’m sure not everybody is excited to have to buy a new guitar for the new game.

I was really impressed by the demo set-up at E3, which was supposed to resemble a live concert. That included a backstage area where you learned how to play the new guitar, a fog machine and cameraman when you ran out onstage, and a place to stage dive onto a big green mat after the show. 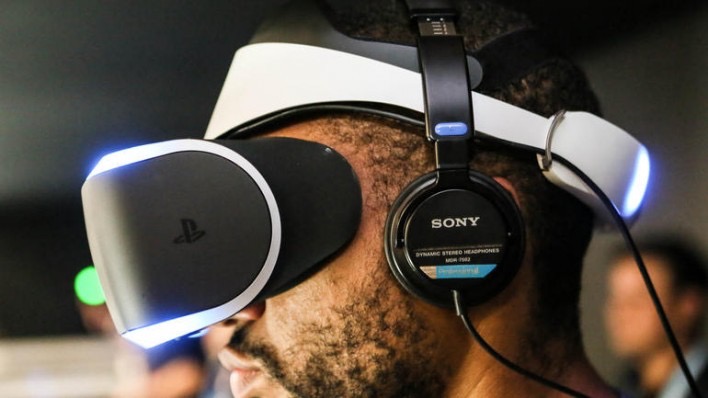 Toward the end of E3, I headed to the PlayStation area to check out their virtual reality headset, Project Morpheus. The set-up included a handful of different games; going in, you didn’t know which one you would get to play.

I ended up playing a few minutes of Godling, a game that had me accidentally setting fire to a serene forest. (Sorry! I swear it was scripted.) I thought I might get motion sick or that the headpiece would be heavy, but everything was surprisingly comfortable. I held a PS4 controller while playing. You move around the world (like walking) with the left stick; you use the right stick to turn your body. However, you also physically turn your head to see around the world, looking up at the sky or checking what’s next to you without having to use the PS4 controller at all.

When I had to backtrack at one point, I did get a little dizzy trying to maneuver backwards and turn my head at the same time. I had to take it slow with my movements — turn my body, then my head, etc. But the weight of the VR headset was comfortable, and the movements felt surprisingly natural.

There was a lot of virtual reality at the convention. Last year, the Oculus Rift seemed like more a novelty; this year, everybody seemed to have it.

I really wanted to try out Adrift, a VR survival game set in space, but in the end I ran out of time. There were several indie titles I hadn’t heard of that utilized VR in some way, too — or maybe they were showpieces for the VR sets. The line for Oculus was also ridiculous; you pretty much had to have an appointment. That’s why I tried out Sony’s Project Morpheus instead, at the end of the show when things were dying down a little.

While wandering around, I saw the Virtuix Omni in action. It’s a full body VR experience. Basically, you put on a bunch of Omni gear — shoes, a harness, a headset — and get inside the platform to start playing a video game. You can walk, run, turn, and jump on the platform so you feel like you’re really moving through the environment. There was a man demo’ing it, holding a prop rifle to play a shooter.

It’s an interesting idea that very much paves the way for full-on virtual reality — like a holodeck experience. However, in its current state, I feel like I would rather sit on my couch to play a video game than have to go through all that physical exertion. (I don’t really like the idea of using a pretend gun like that, either.) Virtual reality is in kind of a weird in-between state right now in that regard. On the other hand, I guess it would make great exercise.

All the Other Entertainment

There are so many awesome photo ops at E3. I saw a lot of familiar characters like Sackboy, Ratchet, Kratos, and Stormtroopers. I got to take an action shot with Street Fighter characters. I also rode a Star Wars speeder and made a trailer in an X-Wing, which was really fun. I played a little of the Devil May Cry 4: Special Edition and tried some Vergil gameplay in the Bloody Palace mode. The Walking Dead VR experience was very popular, and even though I didn’t get a chance to check it out, I did see several zombies wandering around the convention (and trying to gnaw on people). They had a Rock Band stage set up outside by the food trucks to keep people entertained.

There is just a ton of stuff to see. A few of the photos in this post are from my time at E3 this year, but I uploaded more to a Robo♥beat Facebook album you can check out here. =)