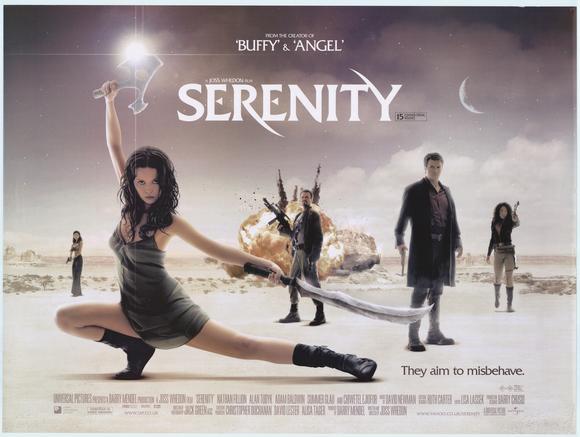 Few movies make me feel as happy and at home as Joss Whedon’s Serenity. Watching that film is like hearing the opening notes of an old, favorite song and knowing that it will always be there, no matter what else happens in life, and even if no other creation ever quite compares to it. You can certainly watch it and enjoy it as a stand-alone movie, as I did the first time I saw it, but it makes a much bigger impact after you’ve watched its origin show Firefly.

Is it totally cliche to say that after watching Firefly, watching Serenity feels like coming home?

That coming home feeling really kicks in around the film’s 10 minute mark, when we finally duck inside the Serenity ship and trail Captain Mal as he speaks to each of the familiar crew members. This dynamic long take rattles on for over 4 minutes, while the Serenity plummets toward its death. Jayne’s loading up on guns, Kaylee’s working feverishly to fix the ship before they all crash and die, and after Mal leaves Zoe with Jayne, the two continue chatting, their voices fading as the camera takes us away from them. It’s a perfect, realistic touch.

The reason I love this long take is not just for the skill and style of it, or for the way it shows off the size of the set: I love it because it seems to invite the viewer in as part of the crew. That’s the magic that makes both Serenity and Firefly so beloved.

Orson Scott Card explained it perfectly in his review of the film back when it was first released (read his review in full here):

“The key to this kind of movie is that you create a community that the audience wishes they belonged to, with a leader that even audience members who don’t follow anybody would willingly follow.”

There’s something about the Serenity crew that feels like family, and that’s part of why Firefly and Serenity have gained and sustained such a cult following, even now, 10 years after the show went off the air.

Sci-Fi Storytelling at its Shiniest

Yeah, it’s shiny. I went there. (If you haven’t seen Firefly yet, “shiny” is slang for cool. But I’m going to talk about all the wordsmithing later…)

Serenity is a soaring example of character-driven science fiction. While other sci-fi often feels cold or gets lost under heaps of overwrought plot, Serenity keeps the focus on the characters and themes, without letting too much happen to muddy up the film’s simple message. Serenity is proof that just because a story is set in the cool expanse of space doesn’t mean it can’t be about the humblest details of what it is to be alive.

The film opens with the good young doctor Simon (Sean Maher) saving his sister River (Summer Glau) from the Alliance. They’ve been brainwashing her, turning her into a weapon they can trigger with subliminal messaging. But because she’s a psychic, she’s picked up a major government secret that they don’t want leaked. And so they send an assassin — the Operative (Chiwetel Ejiofor) — after her.

The question Serenity poses is whether the world would be better off without sin. And it features Captain Malcolm Reynolds and his crew fighting back for their right to misbehave. Without giving away the details of the story or ending, I’ll just say that Serenity is not just about some huge government cover-up — although that’s there — it’s about what makes humans tick. You know that constant struggle we have to better ourselves? It’s part of our purpose as humans, and to have someone force that “better” on us would not end well. We need that struggle. And we’re decent, most of us, most of the time. Life is about taking the bad with the good.

Maybe the thing I love most about Firefly and Serenity is the dialect. I’ve always been interested in unique speech patterns and slang. I love books like Trainspotting, Their Eyes Were Watching God, and Clockwork Orange that are written in a strong dialect, because whether it’s real or fictional, it all adds to the escapism and helps you get a feel for another world. Serenity has just this type of offbeat language. It often adds to the humor, too.

Most of the time, characters speak English, with a few Chinese words or even full sentences thrown in. (They often lapse into Mandarin when they’re cursing, too.) This is because the Alliance is a joint government created when the two Earth superpowers, China and the United States, merged. Even the decor, use of chopsticks, and fashion reflect this dual culture throughout the Firefly/Serenity world. But the English that’s usually spoken has an American Old West flair. In other words, you ain’t gonna hear a lot of “isn’t” in this world.

While the TV show has a careful smattering of this language, the movie is absolutely bathing in it. The first time you watch Serenity, prepare for at least a few lines that require quick deciphering after you hear them. It can be a tad off-putting at first, but it’s not gratuitous. The dialect even serves a special purpose: to take viewers by surprise and force their attention. During key emotional scenes, you hang on every word to understand what’s going on between these characters. And even after watching and mulling over this movie several times, the language still keeps my attention. It’s poetry; even the rants are romantic:

“I got no answers for you, Inara. I got no rudder. Wind blows northerly, I go north. That’s who I am. Now, maybe that ain’t a man to lead, but they have to follow. So you wanna tear me down… do it inside your own mind. I’m not trying to tear you down. But you fog things up. You always have. You spin me about. I wish like hell you was elsewhere.”

And each character has his or her own cadence. Simon and River, being highly educated, don’t use the casual, Old West slang. Meanwhile, Zoe calls Mal “sir” and delivers the slang with a more formal edge. The Operative, who has a British accent, speaks with extreme formality that indicates his training and professionalism. Inara also speaks with more sophistication — meaning less of the slang — but a warmth permeates her speech that hints at her training as a companion.

Honestly, there is so much detail to this universe and its characters, it feels absolutely real, and the language is a big part of that.

“You guys always bring me the very best violence.”

Serenity is packed with plenty of action and special effects, but this isn’t a high-budget film by any means. In his review of the film, Roger Ebert affectionately mentioned recognizing the sounds of pots, pans, and garbage can lids being banged to make the sound effects for a space battle. It may not be sophisticated, but it gets the job done — and well. Scenes set in space and action sequences with sci-fi tech look surprisingly realistic. Sure, the sets appear bulky, but that’s part of the clunk of the Firefly/Serenity world. I love it.

Speaking of sets and effects, I also find myself admiring the lighting in the film quite a bit. A great example is during the sequence that has the Serenity ship passing through Reaver territory; another ship goes by, shining a light into the Serenity as if for an inspection. Watching the light pass over the crew members’ faces makes the scene feel incredibly realistic. This also happens when the ship is landing on a planet, but the light here is softer, like natural sunlight.

As for the action, the most fun sequences are the ones involving some hand-to-hand combat. A scene in which River kicks the ass of almost everyone in a tavern — including Jayne — is one of the best fight scenes I’ve watched outside of a martial arts film.

It’s All About the Details

The problem I have with a lot of science fiction is that it gets bogged down in sweeping plots that feel like they have little basis in reality. Who cares about a huge government conspiracy if it doesn’t affect a single, specific character that we care about, in a meaningful way?

Fortunately, it’s the details that both Firefly and Serenity get right. That’s why when I think about this world, my mind immediately jumps to Wash’s toy dinosaurs, chopsticks and tin cans, Kaylee scrambling to fix parts of the ship as it starts to fall apart at the seams… again.

Honestly, the movie’s last few lines sum up what makes Serenity — the ship and the film — so memorable. Returning to Orson Scott Card’s review, he even went so far as to say, “If Ender’s Game can’t be this kind of movie, and this good a movie, then I want it never to be made. I’d rather just watch Serenity again.”

I guess the upcoming Ender’s Game movie is going to be good, then. But no matter what movies come later, I’m bound to escape to Serenity again and again. Probably forever.

2 thoughts on ““Serenity” Review: Coming Home to the Firefly Verse”