Today I played the most magical video game… because it made me cry a little bit. I had heard that To the Moon was a tear-jerker, but I rarely experience that sort of emotional response to a video game. Excitement, euphoria, feeling like a badass, getting giddy over plot twists and epic moments and character interactions — that’s all part of the gaming experience. But getting a few tears out of me goes deeper than all that, which is why books and movies that do manage to make me cry are so memorable for me. They’re quick to climb their way to the top of my favorites list, and I’m always eager to recommend them to others… so I couldn’t wait to write a review of Freebird Games’ To the Moon. 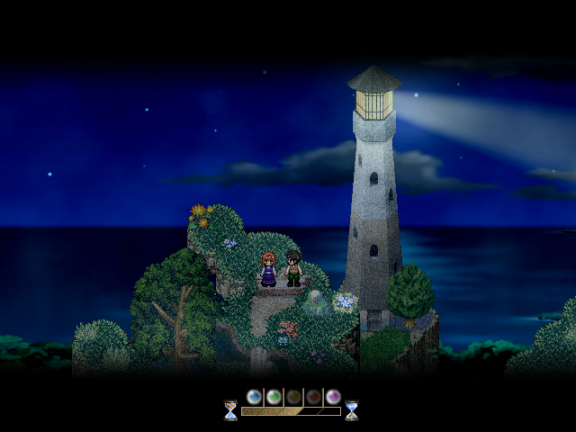 Written and designed by Kan “Reives” Gao, To the Moon is an unassuming sort of game. It has retro pixelation like an old 16-bit game, click-to-move maneuvering, text-only dialogue, and no sounds other than the piano score in the background and a few minor sound effects. There’s very little gameplay other than moving characters around and clicking dialogue. To advance to a new level, you complete a brief puzzle — nothing exceptional. But to be fair, this minimalist execution provides a perfect contrast to just how much the game says, or maybe how much it means. To the Moon isn’t afraid to push its quiet story to the forefront, and it’s proof that sometimes less truly is more. 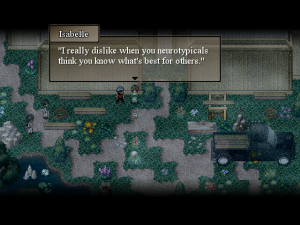 In the game, you control two doctors — Dr. Eva Rosalene and Dr. Neil Watts of Sigmund Corp. — who enter the house of Johnny Wyles, perched on a cliff near a lighthouse. Their job is to alter the memories of dying patients so they die believing that they achieved their dreams. Johnny Wyles wants to go to the moon, though he can’t explain why. The doctors’ task is to travel through Johnny’s memories and figure out how to implant the desire to go to the moon at a young age; that way, Johnny will start down an alternate life path, become an astronaut, and go to the moon… at least in his dying memories.

Traveling back through Johnny’s memories, you learn more about his wife’s death and her experiences with Asperger’s syndrome (though the game doesn’t spell out the condition’s name). It’s very much a love story about two people who feel like they only fit in (or stand out) with each other. But when the doctors make it back to Johnny’s earliest memories, they discover secrets that threaten the love story, if they are to succeed in altering Johnny’s memories so his wish comes true.

I can’t give away too much more about the story, because the magic of this game is unraveling Johnny’s past and seeing what happens with the artificial memories. When the story starts to come together toward the end — and falls apart at times, too — I was genuinely surprised. It has a major Eternal Sunshine of the Spotless Mind vibe; in one part, the memories start to jumble, with rain falling inside a classroom and a bed in the place of a desk, much like the memories began overlapping and flickering in Eternal Sunshine. But To the Moon’s story is one I had never heard before, and I love the unexpected.

The game is also full of humor. Some of the bickering between Rosalene and Watts is a little corny, but references to everything from The Lion King to those little digital pets of the ’90’s to Doctor Who made me laugh out loud. The dialogue is stilted at times — for instance, Johnny as a child used words and phrases only an adult would use, in my opinion — but the story is fresh and poignant enough to completely make up for that. Even small things, such as being able to “randomly” delete NPCs in the memories if you feel like it, make sense as the story unfolds. There are no loose ends in this one.

Besides the story, the real star of the game is the music, composed by writer and designer (and Renaissance man?) Gao. It’s no wonder Steam sells the game and musical score in a pack, if you don’t mind paying a little extra for the songs; the music has real presence. The piano works are not only background music but also feature in the story as Johnny writes a song for his wife, and the caretaker’s children play the piano while the doctors explore the house. Sometimes playful, sometimes nostalgic, the songs are definitely key elements in evoking emotion. You can listen to some of the score on Youtube here.

As far as gameplay goes… it’s very basic. And I liked that. It’s a refreshing change of pace from most games, especially since I play a lot of RPGs for the story rather than the combat.

The gameplay consists of moving the doctors around levels, collecting memory links and looking for a memento that will transport them to the next memory. In between levels, you complete a short puzzle, overturning blocks to reveal an image underneath; it reminded me of a 2D version of a Rubik’s cube, but much less complicated.

There are a few fun moments, such as a level toward the end that has Watts dodging obstacles and throwing trees at zombies. I also loved a part at the beginning that had Rosalene getting ready to deliver ninja moves against a squirrel, with a health bar suddenly appearing and the music picking up pace… only to find out the whole thing was a little spoof on combat-style video games. (Naturally, the children who were with Rosalene were appalled that she was thinking of attacking an innocent little squirrel.) If you love picking up on references, this game has them in droves.

In short, the minimal gameplay kept the focus on the storytelling, which worked well. And even for people who love good gameplay, at four hours of game time, To the Moon is worth downloading to spend an evening getting lost in Johnny’s world, if you think of it like watching a great film.

I’ve talked about liking games with “brains” before, but it’s even rarer to find a game that can inspire real emotion. To the Moon dives into what makes us tick as humans and our longing for connection; even Johnny’s wish to go to the moon is really about love. I mean, it’s one thing for a game to pack in emotion — I’m thinking of RPGs with dramatic moments that are supposed to be epic or tragic, but don’t necessarily feel that way as you play –but it’s a triumph for a game to tell its story very simply and still evoke a strong reaction in the player.

Of course, lots of games have stories, but what sets To the Moon apart is that it isn’t an adventure game telling a story. It’s also not a game with a thin, cracking little story that halfway justifies all the shoot-’em-up combat (with the combat being the meat of the game, naturally). Instead, To the Moon is more of an interactive novella than an action-packed video game. I’m playing Planescape: Torment right now — an RPG known for allowing the player to avoid combat and instead work through the levels almost entirely through exploration and dialogue — and even that game has To the Moon beat in terms of violence and action. As someone who loves stories however they come, being able to interact with a tale via the video game format is pretty exceptional.

But To the Moon is not the only game to elicit an emotional response from me. There were a couple of key moments in Shadow of the Colossus — heartbreaking and then heart-mending — that had me tearing up, and a sad scene in Mass Effect 3 inspired me to turn off the game to recover a little. Journey is another game that got me thinking and feeling as I maneuvered my character across those lonely landscapes. But with all its heartfelt simplicity, no game has been quite as imaginative and moving to me as To the Moon.

15 thoughts on ““To the Moon” Review: Video Games Can Tell Stories, Too”