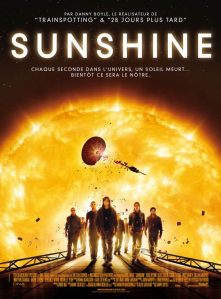 Sunshine is a 2007 science fiction film starring Cillian Murphy, directed by Danny Boyle, with Dr. Brian Cox — the physicist host of some of my favorite science documentaries, including Wonders of the Solar System — as the film’s generous scientific consultant. I can’t decide who of the three I like more, which explains why I had to watch this film.

The movie is set in 2057. The sun is dying. A crew of “eight astronauts strapped to the back of a bomb” is headed towards the sun to reignite it.

The story begins slowly, with the crew mostly pondering and discussing the mission as well as the pragmatism of a rescue mission on the planet Mercury. The crew is divided in opinion, and scientific analysis abounds. It all sounds serious and cerebral… but when you really start analyzing the science, the accuracy of the plot begins to unravel.

When I say Cox is generous as science advisor, I mean that the film is full of inaccuracies — and I have no problem with that. This is a work of science fiction, and some of the complaints pertain to common problems such as how gravity is generated on the ship — something that, to be fair, has only been accurately depicted a few times (2001: A Space Odyssey, Mass Effect’s Citadel). Other issues are why the sun is dying so soon (instead of in 5 billion years), why it’s fading instead of turning into a red giant, how the stellar bomb would really be powerful enough to reignite the sun, and even a silly mistake regarding the temperature.

These are serious problems for a physicist, perhaps, but not for a sci-fi fan enjoying a well-made Boyle movie. Really, I appreciate that the film had a scientific advisor to begin with, and I like that Cox had enough generosity and imagination to give the filmmakers space for artistic liberties.

So here is my disclaimer: If bad science completely ruins a movie for you, don’t watch this film. But if you just plain love science fiction like I do, you’ll probably appreciate the serious scientific feel of the movie, as long as you don’t get too nerdy and over-analyze the calculations.

The film is at its best when it focuses on the crew and delves into their psychological makeup. Decisions must be made regarding a possible rescue mission, who to get rid of to preserve oxygen, and how to handle mistakes. I won’t give away too many details, but this film is not your typical action-packed sci-fi blockbuster — and that’s its strength. Instead, it is a poignant and thoughtful exploration of human nature with an absolutely epic conclusion.

When it’s not man against man, it’s man against space that is the main clash in this film, and it’s pulse-racing stuff. The first half of the film is especially gripping. I was in awe of the idea of a crew attempting a suicide mission like this. Outer space has always fascinated me in part because it terrifies me. We are just not supposed to be out there. And that makes scenes like the EVA, solar winds burning through the station, and astronauts being blasted into the atmosphere without space suits so frightening and compelling. I’ve heard that the film didn’t have a huge budget, which only makes the amazing CGI effects more impressive to me.

The second half of the film seems to fall apart as it switches gears from psychological space thriller to slasher movie. Though my disbelief had no trouble suspending itself for the not-quite-right science, it definitely had trouble with the horror film attempt.

But on the other hand, I’ve read reviews that this part of the film was about religion and madness and possibly the sun’s effects on mental health — much more than slasher fan fodder. Those reviews made me rethink the last half. Though it’s still not my favorite part of the movie, I highly recommend you keep an open mind and dig through this part to lay bare the psychology of the villain. (And if you like slasher movies, so much the better!) I do find myself curious about what drove the villain mad.

My favorite thing about the film is that it’s wide open to analysis and personal interpretation. It’s the type of film that deserves careful attention — that means no getting up for snack breaks — and several viewings to really understand it from all angles. As a Rotten Tomatoes article stated, everyone who worked on the film — from the writer Alex Garland to Cillian Murphy to Cox — had different ideas about what the mission meant to the people involved. To me, that alone is incentive to spend some time spinning the film’s ideas around in my head.