After reading Jeff VanderMeer’s strange science fiction novel Annihilation, I decided to jump into another of his strange sci-fi books: Borne.

I listened to the audiobook, narrated by Bahni Turpin, which helped me finish it quickly as I was able to put my commute to good use. It’s definitely longer than Annihilation, and in many ways the world-building is much stronger here because so much time is paid to it.

And really, that’s what this book is all about: not so much a riveting story, but the world the author creates and the feelings that world inspires.

The premise of the novel is that our heroine, a young(ish) woman named Rachel, lives in a city that’s nearly been destroyed by a monstrous biological experiment: a giant, flying creature named Mord. A company known only as “the company” forged him, and now he’s grown into a terror who rips up and eats anything that gets in his way.

And in this world, Rachel finds another little bio experiment, shaped like a vase, purple (I think), and able to fit in her hand. She thinks of it as a plant, but in time, it talks, it learns, and it develops a bond with Rachel. It becomes like an adopted child — named Borne.

It’s an interesting story, and Borne’s arc from a cute, child-like creature into something strong enough to change the world is well-paced. VanderMeer infuses a lot of humor into the scenes that show Borne growing up, as Borne plays and argues with Rachel while trying to understand what (or who?) he is. The audiobook’s narrator Turpin does an amazing job of depicting Rachel’s maternal love for Borne, as well as Borne’s innate sense of mischief. But there’s also a darkness to Borne, and in the end he must decide how to use it.

I fell in love with the characters in this book. There are essentially three main characters who we know on a personal level: Rachel, her drug dealer boyfriend Wick with a past he won’t talk about, and Borne. The relationship between Rachel and Wick evolves, as Wick dislikes Borne — or maybe doesn’t trust him.

The only trouble with the book is that not a lot seems to happen. The set-up is great, but then I kept waiting for something to happen. I might get an interesting conversation with Borne, or an argument between Rachel and Wick, or a flashback to Rachel’s childhood that sheds light on how the world used to be, and what has become of it since Mord grew crazy. But nothing really happens for a long, long time.

The good thing is that the book compensates for the lack of plot with an amazing world. It’s dark and disturbing. Feral children run around attacking people, as do Mord’s bear-like proxies. Rachel and Wick set up strange traps around their home — which overlooks a polluted river — to keep intruders out. Some of these traps are psychological in nature, such as drugs that can cause people to hallucinate. And the reason Rachel and Wick are so protective and attached to this place is that safe harbor is hard to come by; going out in the streets, where Mord might hunt you and dead bodies act as landmarks, is extremely dangerous. 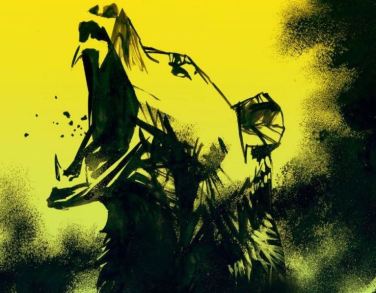 It’s a strange world that I imagined existed in some dark, dirty haze of pollution. Though post-apocalyptic, the fact that it centers on a single city is unique.

I also enjoyed Rachel’s flashbacks, because seeing her happier childhood with parents she lost definitely puts her current circumstances into perspective — as being very, very bad. That’s changed her.

Rooting for Rachel and connecting with her as a character, I started feeling maternal instincts towards Borne too. That made me very interested in learning what would become of him. As he grows, he becomes more dangerous, and worried about the fact that he’s dangerous. Rachel may call him a person, but there’s a part of him that doubts that and doesn’t know what to do about it. It’s an interesting look at morality when you are something not quite human, but want to be.

In this way, Borne as a novel is much more of an exploration of ideas than a traditional story. Annihilation was much the same way. And by the end of the book, I felt like I knew this odd world very well — enough that I was as tired of it as Rachel was. I also felt very invested in what happened to these characters, since the novel focuses so much on who they are, what they want, and what they do every day. The overall arc is really satisfying, too,

I’d recommend Borne to anybody who enjoys truly unique world-building. If you enjoy sinking into strange worlds, Borne will give you exactly that. It’s a slow journey, but I liked it for the time I got to spend with these characters. It opened my mind to a creative world, and made me wonder a little more what it means to be a person.