Now that E3 is coming to an end, it’s time to talk about the games the event showed off this year! While 2017 may not have introduced as many new games as I would have liked to see, there’s plenty of new footage from known games — along with the occasional surprise announcement — to get excited about. I’ll leave out previous big announcements like Destiny 2 and Cuphead, which I already knew I wanted to play, to focus on games that really caught my eye during this E3! I’d love to hear from you guys about your favorite games of the show, too. =)

The biggest unexpected highlight for me was Wolfenstein II: The New Colossus. Part of the reason it’s so “unexpected” is that I haven’t played any Wolfenstein games before. But during Bethesda’s showcase on Sunday, they showed off several minutes of cinematics that introduced the story and the stakes. It’s a world where Nazis have taken over. The footage gave me chills. The gameplay itself looks like hard-and-heavy shooting, and since I dig that style in games like Gears of War, I have a feeling I’m going to have a blast with it here.

But it’s the characters and the gorgeous graphics that really have me intrigued. One of the final shots from Bethesda’s showcase reveals a pregnant woman — the protagonist’s partner — stabbing a Nazi in the background. It seems like this game is going to be over-the-top in every way. I can’t wait to play it, but it’s inspired me to dive into the previous game, The New Order, first.

I’m also excited for Shadow of the Colossus coming to the PlayStation 4. Since I’m already hyperventilating over getting to replay Final Fantasy XII on the PS4, returning to another classic like Colossus is just making me even more nostalgic for these fantastic older games. It’s also cool to be able to introduce others to games like this when they come to new consoles. And the best thing is that Colossus is not just a remaster, it is a full remake with all of the assets redone. The footage from Sony’s showcase is breathtaking.

I also want to pick up Marvel’s Spider-Man. Which I didn’t, originally. I’m not super into the Spider-Man games, maybe because my affection for Spider-Man as a character is pretty centered on the Sam Raimi movies starring Tobey Maguire. (Spider Man 2 = best superhero movie ever for me.) But seeing the gameplay from Sony’s showcase, I couldn’t wait to get my hands on the game. It’s fast-paced and stylish, with slow-motion punctuating some of Spidey’s cooler moves, and both web-slinging and swinging look smooth. It’s been fun watching interviews about the game during E3, because it’s clear the creators have a real love for this character and want to bring that to the game’s story.

Speaking of games I didn’t expect to want to play… I can’t wait for Star Wars Battlefront II. I tried the first game back when it first came out — and just could not get into it. The multiplayer focus was not my style; I needed a campaign to draw me in. Fortunately, Star Wars Battlefront II is bringing a story mode to the game — so that alone is going to make this game a purchase for me.

But honestly, I was most surprised at how fun the multiplayer looked during the EA showcase. The epic battle included dozens of players, and the objective to take control over a certain location seemed very realistic. There were people playing as battle droids on the ground, as well as players taking to the skies in Star Wars fighter planes. You can also access heroes like Rey, Boba Fett, and Han Solo — so yeah, I’m ready to dive into this game, multiplayer and all!

For smaller titles, I’m excited for Housemarque’s Matterfall, since I got semi-addicted to Resogun when I had to write the video game manual for it back in the day. The fast-paced explode-y action is so much fun, and you’re just on the edge of your seat when you play these kinds of games. At least I am. And I’m usually holding my breath. You can get hit at any minute, so you have to be alert and move fast — bringing me back to old arcade games that feature similar stakes. I like that Matterfall features a character moving through the environment, almost like a side-scrolling platformer.

And finally, a game I was not anticipating: Metro Exodus. I love the Metro games. Although they do involve some stealth and horror — two genres that aren’t my favorites — I love the shooting. I love making sure my gas mask is working. I love the survival elements that add tension without being tedious. And I especially love the world-building. The post-apocalyptic setting makes the world outside stark and beautiful (and, being in Russia, often snowy), while in the subway tunnels people have built up a society for themselves. There are places to buy weapons, places to get a drink, even a theater. The focus of the games is very much on the politics of this place. I’m not sure what Exodus will be like, but I’m interested to explore this strange world of survivors again.

And now, it’s time for my list of the games I’m most excited for! Consider the previous ones honorable mentions. It’s hard to narrow down this list, and it’s very possible I’m forgetting something or just haven’t seen something… but without further adieu, here are my top games of E3.

EA’s presentation included an amazing co-op game from Josef Fares, the creator of Brothers: A Tale of Two Sons. The premise is simple enough: break out of prison. The coolness comes from the fact that you and a friend play together, on a splitscreen, sometimes in two different places doing two entirely different things to help the cause. I love the cooperation aspect here, and the way you sometimes split up to tackle the mission seems pretty innovative. I can’t wait to jump into it with my partner next year!

One of the things I love about the Assassin’s Creed franchise is that just when you think it’s going to get stale — another game?! — it does something a little out of the box. Whether that’s a new cooperative mode, a brother-and-sister tale, or close to open-world naval combat on the high seas as a pirate, this series is always mixing things up.

And at the Microsoft event, we got to see footage from the series’ upcoming game, Assassin’s Creed Origins, which hooked me for its stunning setting: ancient Egypt. I was a nerdy kid, and I was obsessed with ancient Egypt for a long time. Going to the Tutankhamun exhibit at the de Young Museum several years ago was a bucket list achievement for me. So being able to explore this world in Assassin’s Creed Origins appeals to me so, so much. It’s easily my favorite setting in the series so far. Beyond that, seeing it in all of its 4K graphical gorgeousness on the newly-announced Xbox One X made me want to play it even more. You can even take to the skies, flying over the landscape as an eagle, or sail a boat from one desert shore to another.

After briefly presenting the game at Monday’s Ubisoft show, they followed up the event with 30 minutes of off-the-cuff gameplay. The open world-style exploration looks so much fun. There was even a cat hanging out in the marketplace. The gameplay also showed off the different skills you can invest in depending on whether you want to play stealth, manipulate the environment to your advantage, or just straight-up stick your spear through enemies. It all looks so fun, guys. And you can use a bow! I can’t wait to play an assassin in this setting.

The Last Night looks like a moody, pixelated cyberpunk game, and since all of that appeals to me, I’ll definitely be playing this game. By Odd Tales and Raw Fury, it’s sparked some controversy after old tweets surface by one of the creators, Tim Soret, supporting Gamergate and claiming antifeminism. However, Soret has apologized for the tweets, Raw Fury has defended him, and it seems to be confirmed now that the game’s dystopian society is not a world where extreme feminism has taken over. (Yeah, that was a thing.)

I’m not sure what to make of all that. But setting all of that aside, the trailer that was shown during Microsoft’s event really impressed me. It revealed a gorgeous cityscape in the rain — all pretty pixels and a dreamy disposition. I’m definitely ready to get lost in this world. 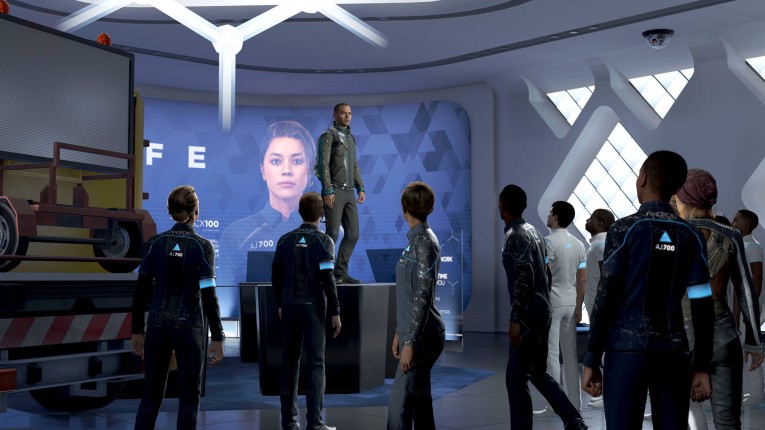 At PlayStation’s showcase we got to see more footage from Quantic Dream’s Detroit: Become Human. I only heard about this game from last year’s PlayStation Experience event, when the trailer they showed — with an AI aiding in a hostage situation — blew me away. Not a lot of games give me chills, but this one honestly did.

This E3’s footage focused more on the epic battle waging between humans and AI in Detroit, with more hints about how the decision-making process can go in the game. Whether the story itself is innovative or not, I’m sure that the gameplay will be.

I knew BioWare was working on a new IP, but I had no idea what it would be like. Would it be fantasy or sci-fi? Another epic, single-player story — or an MMO like their Star Wars: The Old Republic? Needless to say, when they teased Anthem at the EA showcase and then showed some gameplay at the Microsoft event, I lost it a little.

Anthem looks gorgeous — a science fiction adventure in a lush post-apocalyptic world, where you can team up with friends to explore. You’re in a super-suit that lets you blast through the air, like jet packs on steroids. It seems extremely fun, and I’m eager to see what the world looks like.

It’s clear there will be a major social aspect to the game, although I’m not sure how that will be implemented. Microsoft’s footage included dialogue that at first I thought was the characters talking, but within a couple of minutes I figured out it was actually the players talking to each other as they moved through the world — albeit stiff and scripted. I got excited then. The game could play similar to Destiny, at least in terms of that social cooperation. I’m just curious how much of a story the game will have, as that’s what BioWare is known for — not quite so much its gameplay. I guess we’ll see.

In any case, as a fan of sci-fi, BioWare, and co-op, I’m definitely eager to learn more about this one!

So everybody, what video games were you excited to learn about this E3? Are there any unexpected games you just have to play now?