This weekend I was able to play several matches in the Paragon stress test beta. Coming out next month for PC and PlayStation 4, Paragon is a MOBA that features a huge range of characters you can play as. That’s what interested me, even though I’ve never played a MOBA before.

During my time with the beta, I was able to try out four different characters. Matchmaking was a little dodgy, so I played co-op (five of us together, via the game’s matchmaking) against AI opponents. I played on PS4.

The first thing that struck me was the variety to the gameplay. Being able to choose from so many characters means you can play the game however you want. There are characters who go in with guns blazing, others with swords, some with magic or tech powers. It’s awesome. And in each match (which lasts at least a half hour, by the way), you level up as you go and can unlock all of the character’s abilities. I would say it takes half the match to unlock all of them.

These skills are unique to each character, so it’s worth checking out multiple heroes to see which you enjoy playing the most. For example, Twinblast, who uses guns, is able to double his firing speed with one ability. Meanwhile, Gadget, who specializes in tech, deploys a drone to seek and destroy enemies with one of hers.

All of these abilities are assigned to your PS4 controller buttons. You hold the L2 button to see an overlay window appear on the right side of the screen, which shows you which skills you can unlock or upgrade. The HUD makes this really clear and easy to do. However, since it’s a MOBA, everything happens live — there’s no pausing the action to read what each ability does and make a wise choice. I found it a little challenging to figure things out on the go, but part of that is just getting used to the pace of a MOBA. At least I was able to read up on what each ability did while my character was still in action. (The best time was when running to a new objective.)

There was only one map available in the beta, which was gorgeous but a little repetitive after awhile. You have three paths leading to the enemy’s core, and as you go down one of the paths toward it, you have to destroy the enemy’s towers. You also have your own towers, which your opponents will try to destroy as they move toward your core. It’s kind of a race.

There is a little bit of defensive strategy involved, but if you’re trying to keep your core from being taken, it might be too late. There was one match where all of my teammates were defending the core from the attackers, watching the core’s strength deplete as our opponents tore it down. Taking action with everybody else was fun, but at that point, I don’t think we could have won the match considering the enemy core was very far away. 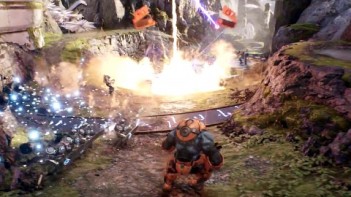 It took me about three matches to figure out what I was doing, really. Watching a tutorial video helped. The thing about destroying towers is that they defend themselves, with a laser that pretty much zaps you on sight. I died about 10 times my first two matches, which is crazy considering that once I knew what I was doing, one death per match was plenty.

The interesting thing is that in addition to your teammates, the game spawns minions that follow you around and fight alongside you. If you approach a tower, letting the minions go first means that the tower’s laser will target them — not you. That means you can stand back and fire at the tower to destroy it. As soon as your character is targeted, you have to run back, outside the tower zone where the laser can’t reach you.

On the flip side, you can use your own towers to your advantage. If you’re facing a tough opponent, retreating to one of your towers deters them from following you, because your tower will shoot its laser at them. This saved me countless times!

It’s exciting to push a lane and have your allies join you in taking down the later towers… or joining your team in another lane to focus on that end goal. Teamwork definitely makes the work go faster!

There’s a lot more to the game that I didn’t explore. For instance, you can equip cards that give you health or mana boosts, but you have to do this back at base (not in the middle of a match). I did this once and noticed a difference in how durable my hero was. However, I don’t know much about how cards work yet, so I’ll need to experiment more if I purchase the full game!

Overall, I’d say Paragon is a lot of fun, but very repetitive. I’m hoping more maps will change things up a bit. However, taking down tower after tower — even in pretty scenery, with different characters — may wear thin for someone like me, who enjoys the storytelling and worldbuilding of RPGs. In the beta, every match felt exactly like the last to me.

The exciting part was trying out different characters and abilities. Here are my quick impressions of the heroes I tried out! 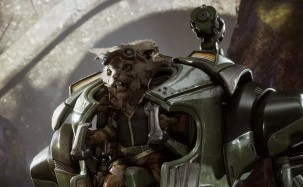 This was the first character I played as. Howitzer is some kind of little creature in a big old battle suit. He reminded me of Rocket Raccoon in Titanfall armor. What’s cool about him is that he excels at crowd control, with the ability to cast at range. He can fire a cannon, a missile, a land mine, and a grenade that slows enemies. The trouble for me was that his heavy armor makes him extremely slow. He plods along like he weighs a ton, because he might, and that felt really tedious to me. I won’t play as him again.

Dekker is a support character who wields a staff, which she uses to shoot energy blasts at her enemies. That was a lot of fun. I also love her character design. However, I was not as impressed with her abilities. One allows her to share mana with allies. Another is a Containment Fence, which traps enemies inside so they can’t shoot; allies trapped inside can shoot and gain a shield against outside damage. However, I accidentally used it once and trapped an ally who was fighting a hard battle against an enemy with a melee style, so he wasn’t able to fight from inside the fence. He had to jump over it. I felt bad about that one! I also feel that Dekker, being support, will be more fun to play if I’m alongside a partner.

I kind of hate Twinblast’s character design. He looks cool, but in a way that kinda makes me want to punch him in the face. However, I wanted to try playing with guns, and he is a dual wielder who actually does an amazing amount of damage. After playing as Howitzer and Dekker, he felt really powerful to me. His ability arsenal includes faster shooting, dual shooting, and a grenade. With other heroes, I was picky about which skills I actually liked to use — but with Twinblast, I found them all useful. If I pick up Paragon in the future, I’ll definitely play as him again! 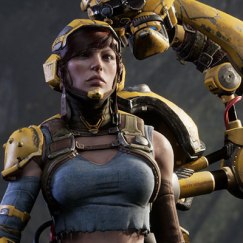 Gadget is a chick in a belly shirt and crazy tech armor. One of her arms is even attached to a big old yellow claw. I thought it would be fun to try out some gadget-y abilities, and I was right. She can shoot a plasma blast, send out a bot that seeks and damages enemies underneath it, and deploy a sticky mine. An ability I used a lot was a gate that damages enemies who walk through it, but speeds up allies who walk through it. That was fun for a little crowd control. I also loved the Tesla Dome that basically enshrouds enemies inside it and rains down damage for a few seconds. Like Twinblast, I found all of Gadget’s skills really useful. However, I don’t think she dealt as much damage as Twinblast.

I haven’t decided yet whether I’ll buy Paragon or not. A part of me wants to, but I need to see if my partner will want to play it with me and what the other maps are like. The beta being so repetitive makes me feel like I need those things to boost my interest. Otherwise, I found the game very fun. =)

5 thoughts on “Playing with Powers in the “Paragon” Beta”