Okay, I know my last post was also about Dragon Age, but I can’t help it! The most fun little smartphone game came out today, and it just so happens to be a Dragon Age game. Which is totally the reason I got it, of course. 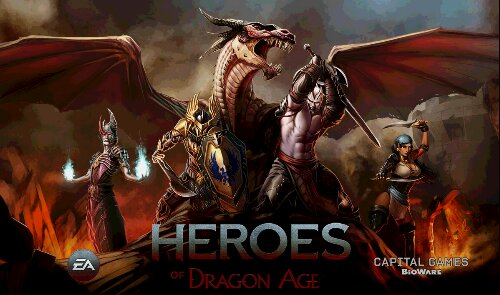 Heroes of Dragon Age is a free game that has you completing quests, dueling other players for trophies, and leveling your squad. But you can change your squad by spending your hard-earned gold on hero packs. Then you can replace heroes in your squad with better ones or even combine similar heroes into more powerful fighters. If there are some you don’t use, you can offer them up to be “consumed” by other heroes (I know… ew) to make the consumers stronger. You can also apply runes to your squad; their effects last for limited periods of time — typically 5 minutes or so.

One you’re actually in battle, there’s nothing to do but watch the fighting play out and see if your squad survives. All the action and strategy on the player’s part happens when you’re developing your squad at camp.

Of course, the game does want you to buy hero packs with real money, but battling lots will eventually earn you enough in-game gold for goodies. Fortunately, you earn a bit of gold and level your characters even when you lose, so if you hit a wall, you can fight through that part just by grinding and failing and grinding some more. I’m at a tough quest right now, so I’m just dueling for gold to buy more heroes and see if I can level up my squad enough to take on this tough opponent.

So far, I’ve been having fun with this game. Even though I’m losing as many duels as I’m winning. (I’m a newb, okay?!) Mostly I’m just trying to get through quests to unlock new maps and see where Heroes takes me next.

The super fun part of the whole thing? The areas, characters, and stories should be familiar to Dragon Age fans, as quests take you through history to relive Zathrian’s curse and battle dark spawn in the Deep Roads, etc. Characters are creatures from the main games, like werewolves and ash warriors, and it sounds like you can actually collect familiar named characters. So… where is my Zevran?!

Even the initial loading screens are awesome, with characters like Isabela, Morrigan, and Alistair popping up and text saying things like, “Harvesting elfroot,” that make me miss Dragon Age so much. And when your character levels up, you totally get to hear that familiar chime-bell!

If we’re being honest here, I’ll probably have moved on from this game by the end of the weekend. But for now, it’s the perfect, nostalgic little game to remind me of just how much I love this series and keep me looking forward to Inquisition. =)

5 thoughts on “Playing the “Heroes of Dragon Age” Smartphone Game!”