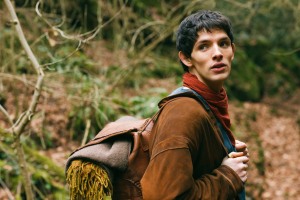 For the past several months, I’ve been mildly addicted to the BBC One fantasy Merlin. Its finale has already aired in the UK, and its fifth and final season is now on Syfy here in the States. And I’m excited that today its leading actor, Colin Morgan (who plays Merlin), won a UK National Television Award for best male performance in a drama. I love the acting in runners-up Sherlock and Doctor Who, but it’s pretty cool that an underdog like Merlin won this award, and Morgan deserves it. (He also gave a career-making delivery of a line on a Tennant episode of Doctor Who, so he deserves the award for that one as well. A few people might know what I’m talking about!)

So in honor of its final season and the attention it’s receiving today, here is a list of reasons why I love this show… and why I think every fantasy fan should give it a try.

Merlin re-imagines the world of Arthurian legend in a way that feels fresh and modern. In fact, that’s what initially hooked me about the show: trying to guess how the writers would sort out the Arthurian stories. For instance, early on, Guinevere is a servant who despises Arthur for his arrogance… yet anyone familiar with King Arthur knows that Guinevere ends up as Arthur’s queen. From the beginning, I was curious to find out when they would fall in love — and how.

I also wondered what would happen when Lancelot appeared on the scene. Meanwhile, episodes like “The Sword in the Stone” caught my attention with their titles alone, because I wanted to see how the show would play with the well-known stories such as Arthur finding Excalibur. And the biggest question I had was whether Morgana, Arthur’s half-sister and a close friend to the main characters, would end up becoming the villain I knew she was in Arthurian legend. (Mid-series spoilers ahead!)

4. Morgana’s Journey From Hero to Villain is Believable

It’s rare to see a character journey from hero to villain, but Morgana does this in a riveting, realistic way over the first few seasons of Merlin. At first a friend to Merlin, Arthur, and Guinevere, she bonds with them over situations such as hiding a Druid boy — a boy with magic — from King Uther, who has banned magic. This project is dear to her, which reveals her compassionate side.

However, Morgana suffers from nightmares on a regular basis, and she finally learns that these are visions — which means she has magic. She fears for her life if Uther finds out, and as she bonds with her half-sister — a witch — and butts heads with Uther over magic, Merlin begins to worry that Morgana is against them. Eventually, she decides to win Camelot from Uther to make it safe for those with magic.

I won’t give everything away, but there are secrets and blackmail and some sort of voodoo dolls, and it all becomes extremely suspenseful by season 4. I’ll admit that Morgana becomes something of a one-note character later in Merlin’s run, but her journey is exciting and realistic for a long time. And what makes her story so believable is that we can relate to her the whole time, even as she makes decisions that antagonize the show’s heroes.

3. It’s Not Afraid to Be Cheesy

Most cheesy shows are just plain bad, and it’s slightly embarrassing to admit when we watch them. I’m thinking of shows like Prison Break or BBC One’s Robin Hood, which have been guilty pleasures of mine in the past. But Merlin almost seems to flaunt its cheesiness, especially with its bromantic bickering between Merlin and Arthur — usually with a prancing little change of music in the background to indicate that the scene has turned playful. There’s also at least one too many episodes involving some evil creature or wizard taking over someone else’s body in an absolutely ridiculous way. In one episode, a goblin possesses the kindly old physician Gaius, causing him to lust after gold and lick coins; in another, Arthur grows donkey ears and ends up braying whenever he tries to speak. These are silly plots that nonetheless make even the most discerning viewers laugh, every time.

After watching Merlin for quite a while, I started craving those moments when Arthur calls Merlin an idiot or Merlin adds a hole in Arthur’s belt because he’s getting fat. I’m not afraid to admit that. So what if the CGI isn’t very good? And so what if Bradley James as Arthur looks more like a boy band member than a medieval prince? The cheesiness is part of Merlin’s charm, and it’s refreshing to embrace that for a change.

Maybe it’s Merlin’s cheesiness that makes it feel so comfortable as a show. It’s welcoming. The characters start to feel like friends after a few episodes, and I began looking forward to tuning in at the end of a long week just to see the familiar faces and enjoy the predictable banter between the characters. The friendships between Merlin, Arthur, Guinevere, Gaius, and the knights (among others) have ups and downs that make them tangible. These people make sacrifices for each other. They take the piss out of each other. They feel like real people, and watching this show starts to feel like coming home in a way that few other shows (Gilmore Girls!) do.

1. The Plotting and Pacing Are Nearly Perfect

The set-up for Merlin’s version of Camelot is simple: King Uther has banned magic because it’s dangerous, and he believes that magicians use magic for evil purposes. (It’s all very Dragon Age to me, but Merlin came first!) Merlin has magic. And he can’t let anyone know. 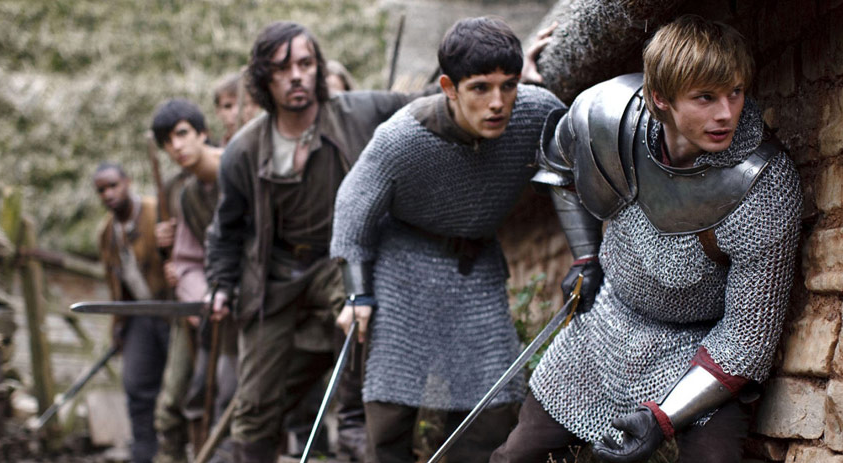 So what strings along the suspense from beginning to end is Merlin hiding his magic from Arthur. Merlin frequently saves the prince and others using magic, but he must do so when they’re no looking, in subtle ways. At one point, he even tries to show Arthur that magic can be used for good — disguising himself as an old man in case things go wrong — but to no avail. And one of the most tense episodes is when Merlin agonizes over wanting to help Morgana deal with her magic by confessing that he has magic, too. Had he told her, Morgana may not have felt so alone, and Camelot’s history might have been very different. (And if that sounds cheesy, let’s remember #3 above.)

Sure, there’s the occasional a-visitor-wants-to-kill-Arthur episode — a lot of those, actually — but this war over magic is the overarching plot throughout the series. I appreciate that subplots don’t overwhelm the main storyline; nothing gets too convoluted. Merlin keeping his magic a secret adds suspense to many of the episodes, and as viewers, we’re left wondering what will happen when Arthur finally finds out who his friend truly is.