After sinking about six hours into Rise of the Tomb Raider, I can tell you I’m enjoying it even more than the first one so far. Lara Croft is a much stronger character in this adventure, which seems to be just what the series was going for. However, she also retains those human moments that make her so relatable.

In the 2013 Tomb Raider reboot, Lara was very much a victim and survivor. Things happened to her. A few times, when she made contact with a friend, she would act relieved and beg them to come rescue her. When they couldn’t reach her — or when she realized on her own that she needed to go out of her way to do the right thing — she mustered her bravery and brains to keep going.

This set her up as a capable adventurer in Rise of the Tomb Raider. Now she knows that she can hunt, she can think fast, she can even kill when she absolutely needs to. She is now off to continue her father’s legacy, looking for the Prophet of Constantinople and the Divine Source — and racing against the paramilitary organization Trinity to get there first. (I could write a whole other post on all of this backstory, it’s pretty fascinating!) 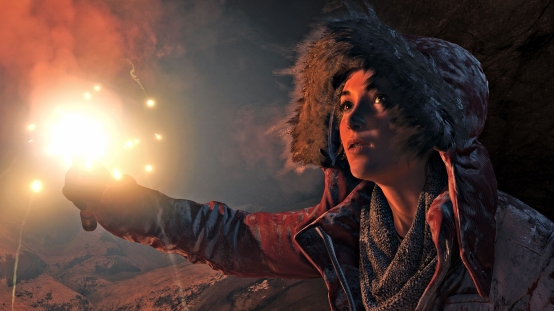 What I love about this story is that Lara finally has some agency. Her father’s partner Ana, and even her own friend Jonah, try to warn her away from carrying on her father’s work. They say it drove him mad, it’s dangerous… but Lara doesn’t listen. She wants to do this.

It feels like the classic Lara Croft from the older generation of games — the explorer, the adventurer, the badass — is back, but more human than ever. The game does a great job of balancing her courage and amazing survival skills with something more vulnerable. You’re biting your nails over what’s going to happen to her, because she doesn’t seem all that invincible.

The game shows her vulnerability in beautiful, subtle ways. One of my favorite touches is how Lara reacts to her environment. If she’s in deep snow, she trudges more slowly. She hugs herself in the cold, rubs her hands together for warmth. If she has to climb a rock that’s very tall, she takes a moment to push herself up — you can see how it takes some effort. The screen has gone momentarily blurry when she’s injured, and her stumbling steps reflect her dizziness until she shakes it off. And although not as often as in the first game, once in a while she’ll say something along the lines of, “I can do this,” to get through a challenge. 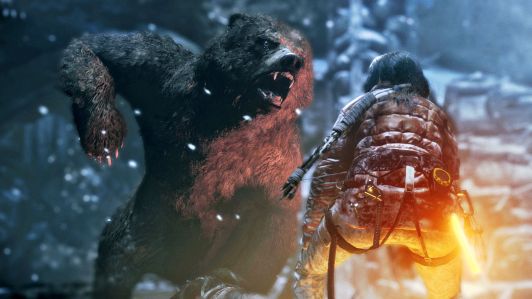 These are the moments we can relate to as we’re playing the game. None of us have been in the kinds of dangerous situations Lara gets into, so we might not know what it’s like to hunt a deer or run for our lives or tussle with a bear. But we understand huddling up in the cold, talking ourselves through tough moments, getting scratches. She may be smart, resourceful, quick, and courageous, but we can all daydream that we could be her, in another life. When you see her breath form clouds in the air because of the cold, you almost feel it, too. You’re there. You’re her.

Lara is resilient, but she’s not a superhero. That’s exactly why I like her so much in Rise of the Tomb Raider.