This is turning out to be a fantastic week for my inner geek, with Bioshock Infinite just out and my two favorite TV shows returning this weekend — namely, Game of Thrones and Doctor Who. But it’s the last one that has me most excited, thanks to the new companion we’ll see on the long-running BBC show.

First, I have to admit that I only started watching Doctor Who when Matt Smith took over as the 11th doctor. I’ve devoured every one of the 11th doctor’s episodes and am now catching up on past seasons, especially the Tennant episodes… but as many Doctor Who fans can probably attest, no doctor quite compares to your first.

This also means that my first companions were Amy Pond (played by Karen Gillan) and Rory Williams (Arthur Darvill). And I love them. The first episode of series 5 sets up the Doctor as a sort of time traveling, science fiction Peter Pan, and Amy is his Wendy… or at least, that’s how I imagined it before I got to know the unique intricacies of the show’s lore. 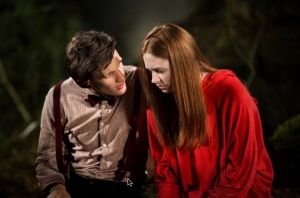 But even though both Amy and Rory have their heroic moments — particularly Rory — they never challenge the Doctor in any major way. In the series 5 episode “Flesh and Stone,” Amy is infected with a projection of a weeping angel, meaning she can’t open her eyes without dying seconds later. Using a walkie talkie, the Doctor guides her through a forest of weeping angels while she keeps her eyes closed. Throughout the episode, she claims she can’t do it and that she needs the Doctor there with her. This is a perfect example of Amy’s reliance on him, which makes some sense given how young she was when she first encountered him and what a large role he played in her childhood imagination. He not only has to talk her through what to do, he has to convince her that she can accomplish these feats.

Another example is in the series 6 episode “The God Complex,” which has the Doctor, Amy, and Rory in an alien building made to look like a 1980’s hotel. Each room contains a person’s fear, which allows the alien to feed on the person’s deepest faith. Rory doesn’t believe in anything and is therefore immune to the beast. (Rory, by the way, is awesome.) But Amy’s faith is in the Doctor, for she truly believes nothing bad can happen to her or Rory as long as the Doctor is there to figure things out and save them. And it is exactly this blind faith in him that makes her vulnerable to the alien’s tricks and attacks.

I’m not saying this to dismiss Amy’s character, because I adore her. And in her shoes, I would probably rely on the Doctor in the same way. Many characters in the show are similarly in awe of the Doctor, and several episodes have one-time characters who recognize him as having saved them in the past. These people wholeheartedly put their trust in him again, sometimes aiding him in spite of dangers and following his directions without question.

The Pond episodes of Doctor Who definitely played on this faith, building up the Doctor as a grandfatherly protector. And that is one side of his character, even though it’s partly a facade.

But starting with this weekend’s episode “The Bells of Saint John,” the Doctor’s new companion is Clara Oswald (played by Jenna-Louise Coleman). She’s bound to bring out an entirely different side of the Doctor, and it’s one I can’t wait to see. Compared to Amy, known as “the girl who waited” on a number of different and very extreme occasions, Clara is impatient and quick to take control of situations whenever she can.

In last year’s Christmas special “The Snowmen,” which introduced Clara as the new companion, Clara was curious enough about the Doctor to follow him and climb a seemingly magical staircase into the sky to seek him out. She doesn’t seem like the type of girl to wait around for him. And when the Doctor explains things to her, she doesn’t say, “I can’t do that.” Instead, she enthusiastically wants to test the Doctor’s theories and her own skills.

This confidence is something Amy never quite had, and I’m sure it will lead to some dynamic scenes between Clara and the Doctor. My hope is that Clara’s enthusiasm and stubbornness bring out the same in him. Whether they see each other as kindred spirits or constantly butt heads, I would love to see a companion with ideas of her own show up the Doctor once in a while — something that’s happened with past companions, but not with the 11th Doctor yet.

Already we can see that Clara is being set up as a larger than life character in her own right. This is a woman who has died twice, in different time periods. She’s already captured the Doctor’s attention in a fresh way, inspiring him to seek her out and discover how she keeps reappearing through time.

To sum up, one of my favorite quotes about Doctor Who is from Craig Ferguson, who called the show one in which “intellect and romance triumph over brute force and cynicism.” (And being Craig, he just had to deliver that memorable quote during a fantastic, over-the-top song and dance number.)

And really, as humanity’s protector, the Doctor believes in people as much as they believe in him. He constantly encourages them to put aside petty differences and aspire to reason, love, peace, and cooperation. I, for one, would like to see Clara Oswald impress him once in a while.