Sound is such an important part of a science fiction world. I’m always listening to the big hit soundtracks, like Daft Punk’s Tron: Legacy and the score for the first Mass Effect game. But what’s interesting to me as a fan sci-fi as well as music is that some of the earliest electronic music composers were inspired by a certain sci-fi film.

Around this time last year, I was researching early electronic music for a personal project I was working on. I’m talking music before Kraftwerk, back when it took John Cage and his collaborators three months to painstakingly slice magnetic tape in order to create a totally-sampled track in 1953.

The science fiction film that sparked many composers’ careers as electronic musicians was Forbidden Planet (1956). The composers were a married couple named Louis and Bebe Barron, who’d been given a tape recorder as a wedding gift. The score they composed for Forbidden Planet was the first ever entirely electronic soundtrack. 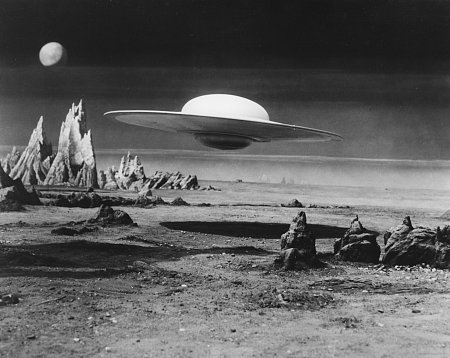 The music is far from melodic. Instead, it’s a series of bleeps and whirring, with a distinctly alien feel. To create the sounds, the Barrons took recordings of everyday noises — a common thing to do in the pioneering days of experimental music — and added effects such as reverb to them. The result was a flood of haunting tones, sirens and alien noises.

Sound designer Ben Burtt, creator of Star Wars’ R2D2 voice and many other science fiction sounds, names the Forbidden Planet score as one of his major influences. In an interview with Wired magazine, he describes the first time he saw the film and heard the music:

“The film created this really eerie, complete world — another world. I really felt like I was off the Earth, in another place that was very frightening. In fact, I can remember being in the theater, wishing that it would be over so I could get back to Earth… I realized a lot of the effect of that on me was the sound of the movie. The electronic tonalities that were… both music and sound effects at the same time.”

Burtt says that electronic music is part of science fiction’s language, and I agree. Of course, it doesn’t have to be; after all, some of the most moving and intriguing science fiction music has a classical bent (2001: A Space Odyssey, A.I., Prometheus, Mass Effect 2 and 3). But there’s something about the electronic soundscape that makes drifting through space feel so lonely and alien worlds seem so foreign.

It’s not surprising to me that a lot of early experimental composers featured in the documentary Kraftwerk and the Electronic Revolution talk about how outer-space-like electronic instruments sounded, especially at that time. Those instruments were sprawling technological triumphs — they took up half the room or covered entire walls — and they suited this era of the ’50’s and ’60’s, when the “space race” was on between the U.S. and the Soviet Union. It seems the Forbidden Planet soundtrack was a big part of that scene.

On a related note, if you’re into early electronic music and want something catchy (that’s pre-Kraftwerk), I highly recommend Tom Dissevelt and Dick Raaymakers (sometimes credited as Kid Baltan). They composed electronic music for Royal Philips Electronics in the late ’50’s and ’60’s, with the aim of making this type of music catchy and accessible. Songs like 1962’s “Syncopation” are so melodic and easy to listen to, they sound way ahead of their time.