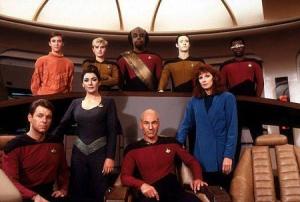 A chance to be nerdy in public is on the horizon! It will be in a darkened theater, but I’m still excited about it.

If you’re in the mood to unleash your inner trekkie, keep an eye out for Star Trek airing at your local Cinemark theater on Monday, July 23. In honor of The Next Generation’s 25th anniversary, Cinemark is showing two of the series’ most epic episodes — “Where No One Has Gone Before” and “Datalore” — on the big screen. Interviews and behind-the-scenes extras will also air.