This isn’t my typical post about science fiction, fantasy, or video games, but I thought I’d share my experience with audiobooks. I’d still count that as a geeky interest, right?

About a year and a half ago, I started driving to work instead of taking public transportation, and to entertain myself on the commute, I began listening to audiobooks from Audible.

While the narrators’ voices took some getting used too — and listening feels quite different than reading — I came to love audiobooks not only for the entertainment value, but because it made me feel like a reader again. I went from reading maybe an hour a week to over an hour a day, and I polished off a novel a week for a while. The past year, my commute has been a little shorter — maybe an hour and 15 minutes a day — but I still manage to read a couple of books a month through Audible.

Some may say that listening to a book instead of reading it visually is cheating, but I don’t feel that way at all. Sure, when you read a book, you have more freedom to re-read paragraphs that you didn’t quite catch, go back to look something up from earlier in the book, and imagine what characters sound like and how a punch line might go in a joke. When you listen to the audio version, the narrator does a lot of the “work” for you there, which can be a delight when they are talented — or a distraction, an annoyance, or just a shame if they pull it off poorly.

However, listening to an audiobook requires a lot of concentration. It’s safe to listen while I’m driving, but it’s actually easier for your mind to wander when you’re listening to a book versus reading. That’s why I actually prefer listening when I’m actively driving — it’s the perfect combination. Whereas once, when I listened to an audiobook while sitting on a long bus trip… I fell asleep.

I also believe the point of reading something that’s been written is to ingest the story or the facts, the way things are phrased, the characters, the emotions, the plot beats. I love to write my own fiction, and I would be happy for people to listen to an audiobook of it — provided I also liked the way it was narrated, of course! 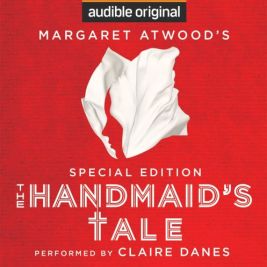 Audiobooks can be really fun when the narrator does a good job. I’ve listened to some books, like Dune by Frank Herbert, that have an entire cast taking over different roles for pivotal scenes. I’ve also listened to books where authors do voices for different characters, including accents. These can be cheesy at times, but also endearing. For example, I listened to 12 books in J.D. Robb’s In Death mystery series, and I came to adore the characters and recognize them by the way narrator Susan Ericksen voices each of them. There are also just some knockout performances, like the introspective narration of Claire Danes reading The Handmaid’s Tale — she reads in a straightforward tone that matches the book’s somber style, yet also brings author Margaret Atwood’s poetic turns of phrase to life.

You can tell when a narrator loves what they’re reading. I’ve come to appreciate a good performance, but I also enjoy the feeling of reading along with someone else who loves the material. That’s what a good narrator achieves.

That’s why I’m very selective about which books I purchase as audiobooks. There have been a couple I tried to listen to, but because the narrator sounded so mismatched to the material — or, in one case, just sounded like an endearing but extremely boring grandpa telling an old story — I switched to reading on my Kindle instead. I usually am listening to one book through Audible while reading a second one on my Kindle, so I can enjoy both forms of reading. I always finish the Audible books much faster, because I am multi-tasking on my commute!

I also occasionally use the Whispersync feature, which lets you purchase a Kindle book for a discount after you buy it on Audible — and then you can switch between reading and listening as you please. That was perfect for me when I had jury duty this month, as I went from driving to work with Audible every day to a week of public transport and sitting outside the courtroom with my Kindle. I could keep up with my book just the same.

If you’re interested in audiobooks, some of my recommendations from Audible would be:

I’m still listening all the time and will recommend more audiobooks as I discover them, on my Twitter and Facebook accounts, for anyone interested. I’d love to hear your recommendations too!

8 thoughts on “Listening as Reading: My Experience with Audiobooks”