This week’s post is special, because it’s a guest post from fellow blogger simpleek! Her blog focuses on a video games, manga, anime, and fashion. I can’t remember exactly how I discovered her site last summer, but I imagine it was one of her lovely Mass Effect-related posts that initially drew me in… Whatever the case, she is one of my all-time favorite writers, and I highly recommend you check out her site if you haven’t already! Here, she pens (er, types) all about why she loves the ’80s movie Labyrinth, which I really want to watch again now…

Ah, the ’80s. A decade full of big hair, leg warmers, acid wash jeans, and cheesy, and at times, downright strange films. Howard the Duck, anyone? I was born in the ’80s, and while most of my growing up has been done in the ’90s, I was still old enough to remember some of that decade. There were a ton of films I grew up watching that came out of the ’80s, like Dirty Dancing, John Hughes films, and Back to the Future. All great films and maybe some not quite age appropriate for my innocent little self during that time. I blame my father for not screening some of these films properly before letting me watch them.

One film I adored from the ’80s and still watch lots of times when the mood strikes me is Labyrinth. This 1986 Jim Henson directed fantasy film starred a really young Jennifer Connelly and ’80s British rocker David Bowie. Of course, who could forget the puppets used in this film to create this magical world? It wouldn’t have a Jim Henson stamp on it without them!

Labyrinth tells the story of a teenage girl named Sarah who is navigating that awkward transition from child to adult. At the beginning of the film, Sarah is a bit of a spoiled child who rather spend most of her days playing dress up and acting out her favorite scenes from the book she loves, The Labyrinth, than take responsibility for anything or anyone. When Sarah fails to come home on time to babysit her baby brother Toby, while her father and stepmother go out for the evening, she gets scolded for her irresponsibility. Seeing Toby as an unwanted burden in her life, Sarah declares out loud how she wishes the Goblin King would come and take him away.

Within an instant of the words leaving Sarah’s mouth, Toby vanishes from his nursery room. Someone really needs to educate Sarah on the phrase, “Be careful of what you wish for. You might just get it.” The Goblin King Jareth appears before Sarah to tell her how he has granted the wish she so desperately desired. Deeply regretting what she has done, Sarah begs Jareth to bring Toby back. Bringing her brother back, as Jareth explains to Sarah, won’t be as easy as taking him away. He tells her she has thirteen hours to solve the labyrinth that will lead to his castle to rescue Toby. Otherwise, her brother will be lost to Sarah forever. And so begins Sarah’s fantastical journey in Labyrinth. In the course of her journey, Sarah befriends and is aided by a number of strange creatures, such as Hoggle, a grumpy dwarf, Sir Didymus, a noble fox-like knight with a dog as his trusty steed, and Ludo, a gigantic but gentle beast.

Labyrinth was one of those underrated films to come out of the ’80s. The reception of Labyrinth wasn’t particularly well-received when it was first released, but it received cult status many years after its release. When I learned how underwhelming this film performed at the box office, I was shocked. I don’t know what exactly were the expectations of most moviegoers during the ’80s. There were films that came out of that decade that were really weird, had barely any plot, or were absolutely stupid. It makes you wonder how any of these films were allowed to be made back then. Case in point, Howard the Duck. That movie was far more bizarre and bad than Labyrinth ever was. I must have been one of the few who saw the gem in Labyrinth as a little girl. While my friends have fond memories of watching The Dark Crystal or The Neverending Story (two films I have never seen until now) growing up, one of my go-to fantasy films from the ’80s has always been Labyrinth. 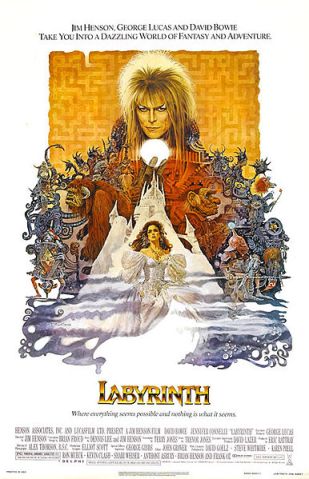 What’s not to like? It had a strange world to explore, creatures not found in reality, magic, a girl who comes of age, and David Bowie’s awesome rock star vocals and looks. Underground, As The World Falls Down, and Within You are three of my favorite songs from the film. I crank up the soundtrack on my iPod whenever I’m feeling dreamy or nostalgic. I also shipped Sarah and Jareth pretty hard. I mean, it’s weird considering the huge age gap between Jennifer Connelly and David Bowie at the time they made the movie, but the film seems to hint at Jareth being in love with Sarah without crossing any inappropriate or creepy boundaries in the movie. Labyrinth does have a bit of romance mixed in if you look closely enough. Albeit, it’s a romance not meant to be, but there’s still one in there. Seriously, just listen to As The World Falls Down and it becomes pretty obvious that it’s Jareth’s way of expressing how he really feels about Sarah. So much love and longing in that song alone. What can I say? It appeals to my romantic side when all other modern day rom-com films fail to do so these days.

Labyrinth is a film that has awakened my imagination and whimsy as a little girl. Even now when I pop the DVD into my player to escape and relive the thrill of watching this film, it brings back all the good feelings I had when I watched this movie for the first time in my life. I still get giddy over the masquerade ball sequence in the film and the ball gown Sarah wore. It also brings back memories of me imagining myself wearing the very same gown and even playing dress up with my mom’s clothes in a feeble attempt at piecing together the same dress from the film.

This movie embodies everything I love about fantasy stories. If it’s possible to get transported to a different world for a day or even a week, Labyrinth would be one of the places I want to go to. If you have never watched Labyrinth and are a huge fantasy lover, I highly recommend it. You’re going to want to go Underground.

12 thoughts on “Guest Post: As The World Falls Down – A Labyrinth Retrospective”