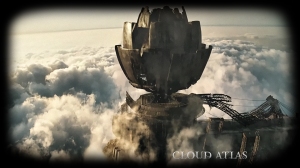 It may be a little late to talk about the film Cloud Atlas — and it’s definitely daunting — but it’s something I’ve been wanting to discuss since I saw the film last fall.

After seeing the trailer for Cloud Atlas in theaters and noticing David Mitchell’s book on the Sword and Laser’s book club for October, I was intrigued by the story — but I wasn’t able to finish the book or hit the theaters the second Cloud Atlas was released. Seeing the movie in theaters at long last, I realize I should have been much more excited. Cloud Atlas is one of the most stunning films I’ve seen in a long time.

In a mind-boggling achievement for writer-directors Lana and Andy Wachowski and Tom Tykwer, the movie manages to weave six different stories and run them through the entire film without confusion. From the first scene, with Zachry’s (Tom Hanks) storytelling under a starry sky, I was hooked.

It’s difficult to explain the stories in detail, and part of the fun of the film is watching these tales unravel in unexpected ways. But I will say there is an exciting variety that keeps the film fresh for all types of viewers. To keep it basic, these stories are: a 19th century racial drama set on the high seas, a 1930’s piece about a composer’s gifted apprentice, a 1970’s conspiracy story being uncovered by an investigative journalist (Halle Berry), a 2012 farce (featuring Jim Broadbent in a hilarious role), a sleek sci-fi escape drama set in the 22nd century, and a dystopian journey set in the far future. Every story is compelling.

What’s most interesting to me is how spiritual this movie seems. The soft-spoken passion of revolutionary Sonmi-451 seems almost religious — and she went on to be revered as a goddess two centuries later. A lot of times, science fiction stories invent strict religions that fail to draw me in; Cloud Atlas approaches thing differently. It possesses more of a general spirituality about the soul and human nature, which I found really moving and much more compelling than any religious exploration.

The Reincarnation of the Soul 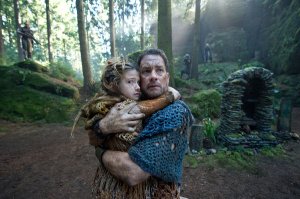 To keep it simple — if that’s even possible — Cloud Atlas is about the reincarnation of the soul. The film emphasizes the idea that we live different lives in different time periods, but we connect to the same souls over and over again. And with these same souls, we keep repeating history — something journalist Luisa Rey (Halle Berry) mentions at one point — which in Cloud Atlas typically revolves around oppression.

Some souls seem fated to oppress others, or at least to maintain the status quo of oppression, while a few will always be revolutionaries seeking to uncover and broadcast the truth. More importantly, the soul can take its own journey over the course of several lifetimes. For instance, the soul of Hanks’s characters evolve from a murdering thief in one lifetime to a reluctant hero who overcomes obstacles, fear, and prejudice to save someone else.

One of the delights of the film for me was seeing the actors transform from one role to the next. Every major actor in the film takes on several roles in different time periods, which represents that these different characters in fact possess the same reincarnated soul. Their goals are also similar as they strive for the same purpose — or perhaps to fulfill the same destiny — are they did in previous lives. For instance, in 1849, Jim Sturgess’s character helps an escaped slave (David Gyasi); in the year 2144, his character helps a clone, or “fabricant,” named Sonmi-451 (Doona Bae) escape from the dinery where she is essentially a slave.  Similarly, Tom Hanks’s characters help Halle Berry’s characters in different time periods, and Hugo Weaving takes a fantastic turn as the villain in a few stories.

Extensive cosmetics allow these actors to transform into the different characters. Obviously some people are not crazy about the racial transformations — Sturgess is made Asian, Halle Berry is made Caucasian, etc. — but this didn’t bother or offend me in the least. If anything, it just drove home the point that we’re all human, and the soul can take many forms and still stay true to itself, regardless of bodily appearance or circumstances. And in my particular theater, there were several gasps of happy surprise at different points when the audience recognized some of the actors in new roles. (Hugo Weaving is a real winner in this film.) Sometimes the cosmetics were so well-done that I didn’t recognize the actors, as was the case with James D’Arcy’s turn as the interviewer in the Neo Seoul story, for instance.

In short, had the actors been different for each time period, the idea of the reincarnated soul would have been lost or obscured in the film. Using the same actor for the same soul was a clever way of making it possible for views to easily chart each soul’s trajectory through the eras. 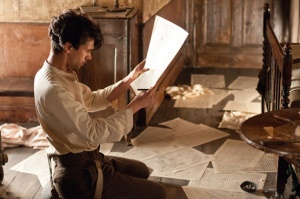 One of my favorite ideas in the Cloud Atlas is how messages can make such an impact, and what you do in this life could influence someone in the future. When the young 1930’s composer Robert Frobisher writes the Cloud Atlas Sextet, his lover (played by Halle Berry) comments that it will never receive acclaim despite its beauty. Nevertheless, in the 1970’s, Luisa Rey (also Halle Berry) tracks down the piece in a music shop, learning that it’s so rare, there are only a handful of copies in the U.S. — but even so, she feels that she recognizes it somehow. (And the music store clerk who can’t quit playing the piece is Ben Wishaw, the same actor who played composer Frobisher.)

Similarly, each main character’s story is in some way passed down to the next incarnations. For example, in the 1930’s, Frobisher reads Adam Ewing’s 19th century journals, and publisher Timothy Cavendish (Broadbent) reads a manuscript about 1970’s journalist Luisa Rey in 2012. (For a great guide to these connections and a character map of sorts, check out Vulture’s guide.)

Arguably less moving but even more important is the budding revolutionary Sonmi-451 hearing the words “I will not be subject to criminal abuse.” Skip back to 2012, when Cavendish first says this in a 2012 nursing home, and it inspires a laugh. But Cavendish writes down his story and makes it into a movie starring Tom Hanks, who delivers this line with dignity (and a hint of melodrama). In 2144, Sonmi-451 watches this film — her first full film, it seems — and is mesmerized by it. This is one line that inspires her transformation from Soap-drugged server to intelligent revolutionary.

What’s interesting to me about all of this is that I missed so much when I watched the film the first time. I did some research on the film the day after seeing it in theaters and read about dozens of other minor connections in the film that I missed, such as the leading actors having brief appearances in other stories, Halle Berry’s characters wearing the same necklace in three different time periods, and Jim Broadbent’s character’s mansion being his nursing home in a later tale. These sorts of details and subtle connections are like Easter eggs for audiences, and it makes me eager to watch the film again.

“There’s a Natural Order to the World”

Hugo Weaving’s villainous characters are always oppressors in some way, whether he’s a Nazi, a nursing home orderly, a Unanimity agent arresting Sonmi-451, or a devilish hallucination. Twice his character makes the statement, “There’s a natural order to this world” — once to his abolitionist son-in-law and again in the Neo Seoul story. Clearly his soul is one that seeks to maintain this supposedly natural order.

The opposition to this line is the one Sonmi-451 drinks up: “I will not be subject to criminal abuse.” This theme runs through all of the stories in some way — and usually in a big, noticeable way. Sometimes it’s comedic, as in Cavendish’s story as an unwilling resident of a nursing home planning his escape; other times it’s poignant and sophisticated. For instance, in Neo Seoul, fabricants are clones birthed to serve; after 12 years, they are recycled, made into soap, and fed to the new fabricants. And in the 18th century, Ewing watches a slave being whipped and later helps this slave transition from secret stowaway to sailor on the ship.

Impressions of the Sci-Fi Worlds

As a science fiction fan, my favorite story was the Neo Seoul tale, which featured Hae-Joo Chang helping Somni-451 escape in a futuristic world. It had a Blade Runner look and feel to it, which I loved. And the action sequences, beyond being fast-paced, were incredibly stylish. I fell for the characters in that story more than any other, and many have said that it would have made a great movie on its own.

The other story set in the future was less impressive to me, though I loved how unique Zachry’s tribal world was. Attacks by cannibals made it clear this land is dangerous and bloody — and it made the appearance of Meronym (Berry) in a sleek white spaceship all the more surprising. The contrast between the primitive life in the valley and the advanced technology elsewhere definitely captured my imagination.

Fate, souls, reincarnation, worship — viewers can approach Cloud Atlas however they want. But the subtle connections between characters, which are often more emotional than cerebral, inject these stories with a spiritual poignancy. I left the theater feeling sort of hopeful; parts of the movie are even cathartic. It’s rare to experience that in films today.

In short, I really recommend this movie, and it’s inspired me to go back and read Cloud Atlas. (I’ll admit, I read the Neo Seoul sections right away last fall and have yet to finish all of the others!) I can see science fiction fans embracing it for its invention and world-building. The film never slows its pace and does a perfect job of bouncing between entertaining comedy and thrilling action. It’s also one of the most stylish, thoughtful films I’ve seen in a long time, and it tugs not so much at heartstrings as at that indescribable place that makes us feel connected to the world and other people. Maybe that’s sort of what a “soul” really is.