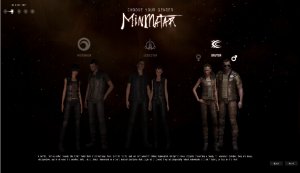 As an RPG fan, I love character creators. Some make your characters look a little weird (Mass Effect 3, ugh), but others are pretty amazing. Dragon Age: Origins has an excellent one, in my opinion, thanks to lots of customization options that make characters look realistic and unique… Plus, the portrait in the character creator is accurate. Few things are as scary as creating a good-looking character, then launching the game and finding a monster in his place.

Star Wars: The Old Republic has a fairly limited character creator, but at least your character is guaranteed to look fantastic, thanks to perfect facial proportions no matter how you customize. And the most fun character creator I’ve tried is Saints Row: The Third, which you can access as a “demo” from Xbox LIVE, even if you don’t purchase the game.

But this weekend I found a character creator that surpasses all others, and it’s from a most unlikely source: EVE Online. As far as I know, EVE is not a game that has avatars walking around looking at each other; it’s a serious space MMO, after all, known for its sprawling universe and the sort of complexity that makes newcomers like me a tad terrified.

But so far, I haven’t gotten past the character creation screens, because they are so detailed. As in most character creators, you can choose your character’s skin color, eye color (which for some reason is never the right color in this case), makeup, scars, tattoos, body build, and clothing — but that’s just the start. The cool thing about this creator is that you don’t use sliders to adjust details like “cheekbone width” or “chin depth.” Instead, you click and drag those features all over the place, on the spot, to customize your character’s face with ease. It’s incredibly intuitive and makes each character look totally unique. I’ll admit, I’ve created about five characters for no real reason except that EVE’s character creator is so much fun… and clearly I had time to kill this afternoon.

And when you’re done with a character, you go to a portrait screen that lets you adjust the character’s expression. Make him smile, open his mouth so he looks shocked, have him raise one eyebrow, make him cock his head to the side or look up and to the left like some space-faring adventurer with true ideals… I mean, the expressions can be frightening sometimes, but you get to take four portraits (and re-take all you like).

Maybe it’s just me, but if you’re into character creators, definitely check out this one. EVE Online has a 14-day free trial, which is worth it for the character creator alone, in my opinion. (And if you’re a writer, you can bring your book’s characters to life!) The results are nuanced and realistic, which as you can tell I absolutely love. Whether I will complete the daunting task of learning to play EVE Online in the next 14 days is another matter…

25 thoughts on “The Best Character Creator Ever!”