Last weekend I played the new video game For Honor pretty obsessively. After playing a demo at PlayStation Experience and the beta a few weeks ago, I enjoyed the combat but found it really challenging too.

The control scheme is tricky — melee fighting requires you to hold the left trigger while moving the right stick to aim your attacks, which you deliver with the right bumper and right trigger. It’s unlike anything I’ve personally seen before.

Jumping into the beta’s multiplayer modes, I hacked away at enemies but went down quickly. I had no idea what I was doing.

Assuming the game was really hard, I decided to buy it for the campaign. That makes me laugh now, but that’s what I figured — that I would just play the For Honor story for the sake of experiencing the unique world and fighting, and then put the game down. I’m not a multiplayer person anyway… 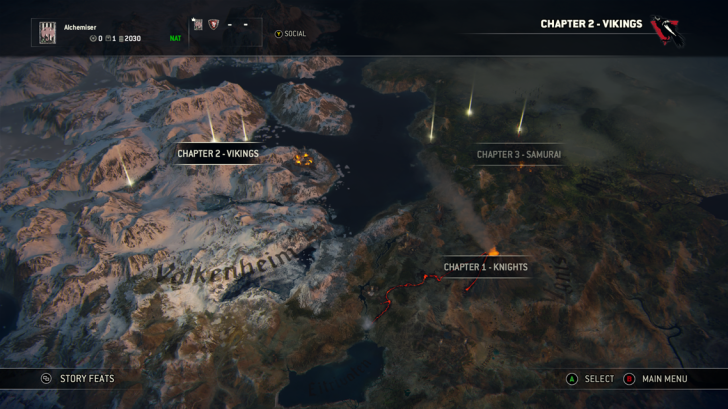 The campaign itself is quick — I played through it in co-op in about six or seven hours. It’s also easy compared to how the multiplayer feels. I started out on the Normal difficulty but bumped it up to Hard for the second chapter and found it much breezier than expected. Maybe that’s partly a symptom of playing co-op. The game doesn’t feel very set up for co-op; in one boss battle, you and your partner have to take turns fighting the boss, while in another it feels like the two of you are just gaining up on the boss (so, easier fight). In any case, I recommend the harder difficulties for the campaign, especially when you’re playing with a partner.

The campaign covers three stories, whisking you through a chapter about the knights, then the Vikings, and finally the samurai. Set in a medieval time period, these three factions have been battling in an epic, thousand-year war.

It’s not the most realistic story, and you definitely don’t require the background of the campaign to appreciate the setting and character classes if you want to jump straight into the multiplayer. However, I had fun with some of the innovations like fighting on breaking ice, chasing an opponent on horseback, setting poison traps, and setting fire to a village full of enemies, Viking-style. The campaign also serves as an excellent introduction to about half of the character classes.

The best thing about the campaign is that I was excited to finish it, because I couldn’t wait to choose my character class and start leveling them up. As a huge fan of character customization in games, that’s what I was most looking forward to, and since the campaign didn’t offer that, I wanted to jump into multiplayer. I felt I had adequate skills at that point.

As a side note, I will say the music and graphics in this game are incredible. Just listening to the strings playing while you create your emblem at the start of the game is beautiful, and the depth of color and detail in the graphics when the story starts is striking.

Multiplayer is what For Honor is really about, and it’s where the game will get its longevity. It’s an exciting experience. The only multiplayer I’ve participated in before is with shooters, like Destiny, so having to spar face-to-face with an opponent — wielding a melee weapon, blocking direct hits, watching those stamina bars to decide when to attack and in which direction — is a rush.

There are three main multiplayer modes I’ve been playing so far: Dominion (4-vs-4 capture the flat, zone control gameplay), Dueling (one-on-one combat), and Brawling (2-vs-2 combat).

Because the fighting feels so balanced toward “even” battles — one opponent facing another, in close quarters — I love dueling and brawling. So far, I find them perfect for mastering moves. Playing against the AI is smart when you’re just starting out, as the AI is a bit more predictable than a real player. And beware that when playing against others in a Brawl, they may both go running towards either you or your partner, gaining up on one opponent to win rather than creating two separate duels.

That’s where the trouble comes from in For Honor: It’s very hard to win a fight when you’re up against more than one enemy at the same time. The game accounts for this by letting you block with basic flicks of the right stick for all opponents you’re not directly locked on to — but it’s still hard to time everything just right if you’re overwhelmed with enemies.

That’s why Dominion mode was so stressful for me when I first dove into it during the beta. I just had no idea what I was doing yet. But once I had finished the campaign and mastered at least the basic blocks and attacks of For Honor‘s unique combat system, I found Dominion to be the most striking of all the multiplayer modes. (It also seems to be the most popular.)

In Dominion, you rush in as a four-player team to take control of a location, such as a castle or fort depending on the map you’re on. You capture zones, fight AI spawning in the center of the map, and defeat the opposing “Heroes” (as player characters are called) whenever you can. All of these successes grant you points. If your team makes it to 1000 points first, you’re challenged to finish off the other team’s Heroes to end the match. You’ve won control of the area!

The thrill of this mode comes from the balance of how easy it is to capture a zone when nobody else is there — but the fear that an enemy Hero may be waiting for you around the next corner. Unless you’re playing with a full team of friends, it’s pretty hit or miss whether you’ll be placed on a team that strategizes together or not. But when you do land a smart team, the victory is electrifying.

For Honor‘s combat is at its best when you face off against another Hero in a duel. If you get gained up on… like I said, it’s hard to win against more than one other enemy at a time, so it’s common to see people run from these fights and revel in the safety of a captured zone, where they can regenerate their health. However, if you do battle it out with a single other opponent, the duel is like a dance that can make a win — perhaps with a swift Execution move at the end — feel incredibly rewarding.

I had to learn the controls during the beta by playing Practice mode. This sets you up to spar against the AI, each of you respawning when you die while the victor retains whatever health they had before the death. It was the best way to learn how to maneuver my character on the battlefield. As someone who doesn’t dig blocking very much, I especially had to practice patience as I blocked in the right direction to guard against or parry my opponent’s attacks.

But your chosen Hero has more than just a light and heavy attack to deal damage in combat. Each also has a unique Guard Break move, such as a kick or a throw; attacks that can be strung together into combos; a Revenge meter that fills when you guard successfully, and gives you immunity and extra power when you unleash it; and Feats, which are abilities and boosts that unlock during the course of a match based on your attacking. (The coolest I’ve seen so far is setting traps, handy for after you capture a zone!)

As an example, my main character right now is the Nobushi, a samurai with a great balance of range, defense, and agility. She kicks opponents to break their guard, punctures opponents with her naginata to cause bleeding damage, and has Feats that give her allies health boosts and rain arrows down on the opposition. All of these add variety to the gameplay, especially as you can choose from an array of Feats unique to your Hero.

Another fun thing to do is use the environment for damage — or even an instant kill. You can knock opponents off cliffs, over bridges, into pits, or into fires. Each map has these opportunities for spectacular kills. (They’re also dangers to watch out for if your back is to one of them in a duel!)

Did I mention I love customizing my character? I might have to write a whole post about my Nobushi sometime and show some gameplay, but for now, let me just say that the customization is equal parts fun and frustrating.

After a multiplayer match, the game scavenges the battlefield for you to find loot for your specific character — you might end up with a new hat, armor, or weapon part. As you gain levels, you eventually gain Reputation ranks on top of that, which give you access to better gear. It’s one of those addicting systems that just makes me want to keep playing, leveling up, and spending in-game currency on crates with new items.

The other fun part of customizing is that, even without that gear, you can customize your character’s basic look with colors and emblems. You can choose a color set for your armor when you’re the attacking party versus when you’re the defending party, and decorate items with your personal emblem and other symbols.

Now for the frustrating part: For Honor also offers a number of items that require a ridiculous amount of in-game currency to purchase. If you’re patient, wait until you’ve leveled up for a few days or weeks to get them. If you’re impatient, spend real money on them. I’m just not a fan of paying money for in-game items on top of the $60+ I already spent on the game — but I’m not that patient, either. It’s a conundrum. If that’s something that annoys you about games, just beware that For Honor wants to tempt you into paying real money for things, and be prepared to ignore it if you’re able!

Other minor issues: If you’re playing Dominion matches, and other players don’t stick around for them, you’ll get kicked out to the main menu. I don’t know why the game doesn’t just fill the open spots with new players. I also don’t understand why my partner gets kicked out of my private party when this happens. When playing the campaign, every two or three missions my partner would get kicked out of the party as well. Maybe these are just kinks Ubisoft is still working out, but be prepared for minor server annoyances there.

Overall, For Honor is an excellent hack-n-slash game if you like a more methodical approach to the hacking and slashing. The control scheme is tricky to learn, but it’s originality is exactly why it’s so rewarding to master. The breadth of character classes available and depth to each one — with Feats, combos, and unique gear — makes choosing your Hero and leveling up in multiplayer feel like a personal triumph. The fact that battles revolve around melee fights in stone castles and red-roofed temples makes the multiplayer refreshing, too. I recommend this game for anyone who likes a medieval challenge!