About two years ago, I played a video game by a new French developer called Dontnod. The game was called Remember Me. Set in a futuristic, dystopian Paris, it featured a protagonist named Nilin who was a memory hunter, meaning she was able to go into people’s memories and alter them. This allowed Nilin to change people’s motives so they sided with her, among other things.

For a video game, this “memory remixing” was a fascinating mechanic: I was able to click a button to rewind time as much as I liked, pausing at any time to investigate the environment and make some change — move a table here, unplug something there. I would watch the results play out in the memory, but if I didn’t like the outcome, I simply rewound again to try something different. These were complicated puzzles; typically, I needed to enact a very specific combination of changes to create the desired effect. I had a blast.

The problem was that the rest of the game was lackluster — particularly the repetitive combat system, which tried to be beat-’em-up but failed to deliver much variety. At some point, I told someone I wished there was a video game with just the memory remixing. That, on its own, could be a stellar game mechanic to base a video game around.

Fast forward two years (less, really), and we now have a brand new IP from Dontnod: Life is Strange, an episodic series published by Square Enix that features exactly what I was hoping for. If you haven’t played it yet, I’ll break down the first episode to give you a taste of how kick ass it is, without spoiling the whole story. 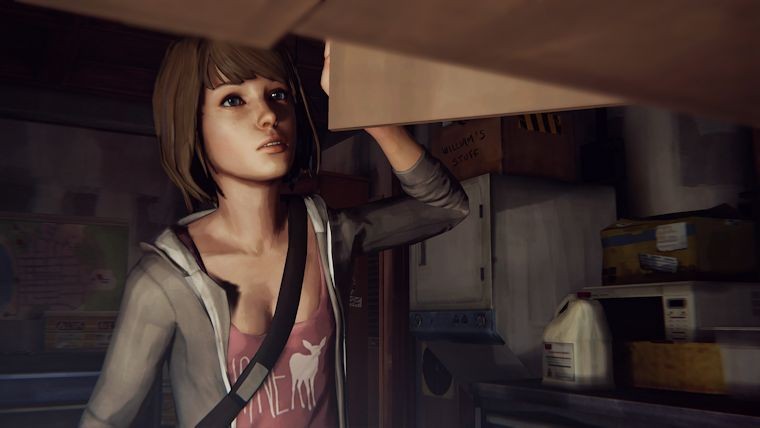 You have a senior in high school named Max — short for Maxine. She just turned 18 and has moved back to her hometown of Arcadia Bay, a “hick” town she left five years ago for Seattle. She’s living in the dorms to attend a prestigious high school exclusive to talented seniors. The reason she’s there? Well, she has to take the whole gamut of high school classes, but her focus is photography, and she’ll be learning under the famed international photographer Mark Jefferson. Max has a little crush on him.

But like any high school, there are mean kids and cliques, popular girls in designer clothes and geeks in hoodies who would rather nerd out than go out. Max is definitely in the latter crowd — if you can call the geeks part of a crowd. And she’s having to learn how to navigate the social scene while preparing an entry for the photography contest Mr. Jefferson wants her to participate in.

But on a seemingly normal day in October, Max blacks out in class. This is how the game starts: She has a vision in which she’s caught outside with a tornado on the way, climbing the stairs to a lighthouse she knows from her childhood in Arcadia Bay. After she comes to, she’s right back in the classroom, everything perfectly normal.

Later, she heads to the school bathroom and discovers two students there, one of them waving a gun. When one of the students is killed, she discovers an ability that totally freaks her out: She can rewind time. So she decides to rewind time to change the outcome of the event and save the student. This student turns out to be her best friend from when she was a kid, Chloe.

So down the rabbit hole she goes.

I’ll be honest: Never before in a video game have I played a character so like my high school self. Max is shy, plain, a little geeky. She can seem nervous, socially awkward, passive. You’re able to read her diary to get a feel for her sense of humor and ambition, as well as her insecurities. She makes dorky jokes to herself, sighs wisftully over her crush on Mr. Jefferson, bitches about the mean girls at the academy. It’s total teenage stuff.

The thing is, I usually hate teenage stuff. I’m not a big fan of teen movies or TV shows anymore, because I feel more interested in and challenged by media that focuses on the issues adults my age are facing. But it’s not just because I’ve “outgrown” any of that — it’s just that so many shows focusing on teenagers are all about love triangles and drama I never experienced when I was that age.

There were exceptions. I love Gilmore Girls because I related to Rory Gilmore like no one else. I still love that show. It deals with a realistic teenager, who faces realistic problems. Even though I didn’t see the same character in Friday Night Lights, I felt a similar connection with the teens and their troubles on that show.

But that’s rare. Unfortunately, it’s not that common to see anything resembling health or reality in teen media — at least from what I’ve noticed lately. (I’ll admit I usually avoid it, so maybe I’m missing some cool stuff.)

But in creating Max, Dontnod has developed a character I can understand. In most situations in the story, I would act the same way she does. Whether it’s sputtering her way through class when forced to answer a question or just lame-dancing with her friend, I totally relate. That’s why I like Max so much — she rings true to me.

As an introverted person, I am so excited at the prospect of being able to play a video game as someone very similar to myself in real life. I’ll make choices that will probably feel more personal than many others I’ve made in games before. The fact that the world is very much this one — modern times, realistic setting — makes decisions feel even more intimate.

Mostly I just love the accurate portrayal of a shy character. People around her comment on her being “quiet,” but she’s also kind, sarcastic, and host to a rich inner life that lets her geek out with like-minded people when she’s lucky enough to find them. There’s a brilliant moment early in the game, introducing the credits, when Max leaves class and faces the noisy school hallway. It’s filled with other students complaining, gossiping, bullying, having their tedious little catfights. Feeling overwhelmed, Max puts in her earbuds. Immediately the game’s sound shifts to mute all that mindless chatter, and you just hear Max’s music start playing in her ears. Suddenly everything feels more relaxed, and you understand how a shy person feels in needing that inner world to quiet down everything else once in a while.

The stylistic choices make Life is Strange feel like a very rich experience. You’re totally transported not only to this small town or the academy, but to the inside of Max’s head. It’s the little details that bring themes to life, such as the butterflies that flutter by Max every so often. The interface displays icons in pencil sketches. To catch up on the story, you can open Max’s diary to read her latest entries; they look handwritten, with doodles and stamps and pictures adding life to the page. The intimate art choices throughout the game really help you step into Max’s shoes.

While navigating the in-game world, you click on things to interact with them. Sometimes Max can just look at something, in which case you’ll hear her thoughts on it. Other times, she can actually pick something up, open a door, talk to someone, etc.

It’s interesting that when given the opportunity to erase something on a dry erase board and doodle over it, I took it — and so did most other players, according to the stats at the end of the game. I also found myself using everyone’s computer, even when the person was right there in the room and could see me snooping. I was a little spy. Interaction is everything in this game.

A little digging around can bring up many clues and opportunities to interfere in situations. A lot of them I missed. For instance, I didn’t want to waste too much time snooping through mean girl Victoria’s belongings when I snuck into her room; I was afraid she would walk in on me. That meant that I missed some chances to mess with her. (I learned this via the stats shown at the end of the game — it shows you what you missed as if you had chosen not to do it. Kind of spoilery.)

But it’s silly that I worried Victoria would walk in on me, because Max’s power lets her avoid all kinds of unwanted consequences for her actions. She can literally rewind time to redo anything she wants. I ended up having some conversations with people three times in a row just to figure out which outcome was best. Once, I went back to my first choice after seeing how all the options played out.

The importance of decisions you make are made apparent when the game tells you, “This action will have consequences.” Typically, after making a choice, Max’s inner monologue starts reflecting on the pros and cons of what she just did. She leaves off wondering whether she should have done things differently… This is your prompt to rewind time and try again, but you don’t have to.

And here’s the strange thing: After the initial rush of being able to rewind time wore off, I tended to stick to my first action without bothering to rewind. I have always said that when I play Telltale’s episodic games, I stick to my choices and don’t replay the games to see other outcomes. I want one canon playthrough. That’s it. It’s like real life, right? You can’t redo things in real life.

I’m not saying I never rewound — sometimes you have to in order to solve a puzzle or pick up a clue without being caught by the evidence. For instance, at one point Max knocks something over and spills on it, but she’s able to peek at the photo there to gain insight into a suspicious character. Then, you need to rewind time so nobody sees that she knocked anything over or spilled anything. It’s like it didn’t happen, yet she now has that extra knowledge.

That’s why the mechanics of Life is Strange mechanics are so fascinating. Unlike real life, Max can redo things. Who hasn’t played a video game where they made a decision and regretted it? Even being the way I am — a stickler for sticking with my first choices — I’ve reloaded old saves to replay key decisions when I realized just how wrong they were. Life is Strange is basically telling gamers to do just that, except now you can rewind time instead of reloading an old save. It wants you to do that. It’s almost as if Max is in a video game, able to “play” her life — even “cheat” it.

I’m excited to see how these mechanics come into play in future episode and watch Max’s story unravel. If you’re into story-based games, this is a must-play.