This weekend I read my first Batman graphic novel, Dark Victory by writer Jeph Loeb and artist Tim Sale. It’s the sequel to the popular Batman: The Long Halloween, which I should have read first… but I was impatient for a good Batman story involving Robin. Dark Victory definitely delivered on that front and impressed me even more than I expected.

The book follows the Batman and Police Commissioner Jim Gordon as they try to solve a serial murder case targeting cops. Each murder is a hanging that occurs on a major holiday that month. The murderer leaves notes depicting the game hang-man with strange, half-finished answers such as “Knows if you’ve been bad or good” and “Guilty as sin.” And they’re all written on old papers from former D.A. Harvey Dent’s office.

I enjoyed Harvey Dent’s story throughout the book. Now scarred, psychotic, and calling himself Two-Face, he shirks redemption at every turn. Batman repeatedly refers to him as an old friend, but Two-Face refuses to answer to his old name of Harvey. There’s even a scene of Batman literally chasing Dent in the sewers beneath Gotham City, telling Dent he could return to the law and find redemption there: 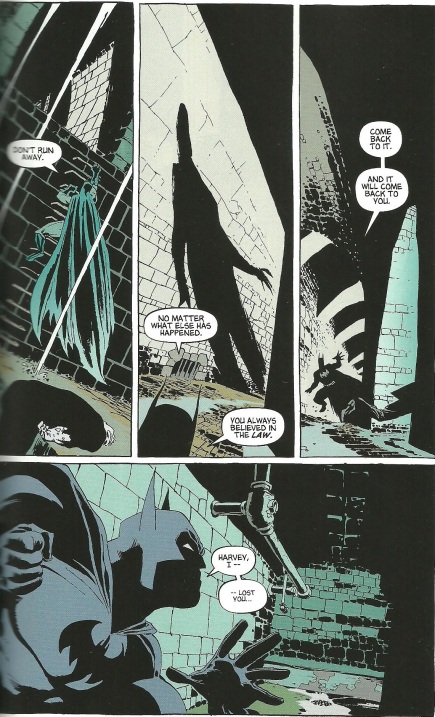 But it seems it’s too late for all that. Whether it’s an active, conscious choice on his part or not, Two-Face is too far gone for salvation. And with all of the evidence from his old office in the Hangman murder case, he’s one of the prime suspects. 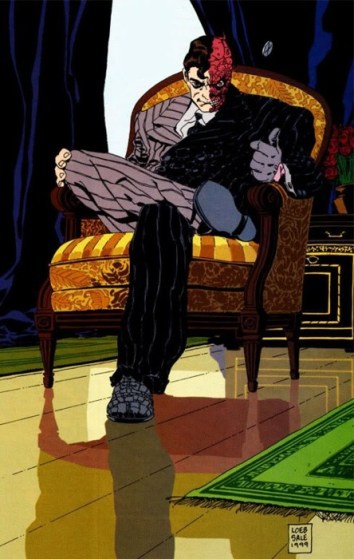 But there’s also the strong possibility that he’s being framed, and Gotham is teeming with possible suspects. In addition to the big crime families in the city — particularly the Falcones — many of the most famous villains from the Batman world are on the loose from Arkham Asylum after a Halloween escape. I particularly enjoyed appearances by the Joker, Scarecrow, Riddler, and Mr. Freeze.

Another familiar character who makes several appearances is Selina Kyle, both as Bruce Wayne’s girlfriend and Catwoman. Both Bruce and Selina are busy and distracted by other things — particularly when they’re in their masks — but it’s Bruce who’s especially uninvolved in their relationship. On Christmas Eve, Selina waits for Bruce at his manor without luck; the day after Valentine’s, Bruce shows up at her place to apologize for not being there the night before, saying he had a delayed flight. Selina finally breaks it off with him, but this plays into the main dilemma in Dark Victory: Batman needs a companion.

Hints drop throughout the book about Bruce/Batman being isolated — too much so. Alfred comments on having to serve Thanksgiving dinner for one. He also warns that even the Batman is not infallible; Bruce needs another set of eyes when he works, in case he misses something or makes a mistake. (Bruce does not like hearing this.) And Bruce himself repeatedly remembers how he almost told Harvey Dent who he was… just moments before the acid was thrown in Harvey’s face, instigating his terrible transformation. Had Bruce shared everything with Dent, maybe Dent never would have become Two-Face. As Bruce says, “He might have trusted me more, if I had trusted him.”

Of course, Batman isn’t the only one who needs someone. At the start of the novel, Jim Gordon is estranged from his wife and son and is trying to repair their family. In addition to being a sweet subplot, this also puts Bruce Wayne’s personal journey into focus. Just as Gordon needs a family, so does Bruce — and Batman needs a partner.

He finds that in the boy Dick Grayson. When Bruce attends the circus just after Mother’s Day, he witnesses two performers plunge to their deaths when the ropes holding them up unexpectedly tear. The couple’s son, Dick, watches from a platform overhead. Next thing you know, Dick is living in Wayne Manor.

Bruce is hardly a father figure to Dick, especially as he’s preoccupied with the Hangman murders. But having seen his own parents murdered before him, Bruce understands what Dick is going through and wants Dick to be able to do what he never could: find the killer and avenge his parents.

So he trains Dick and helps him see this mission through. Learning from his past mistake in not opening up to Harvey, Bruce also reveals his identity as Batman and his parents’ deaths to Dick. They’re both orphans. Now, this is something I’ve heard a lot about in discussions about Batman — that being orphans is the major link between Batman and Dick Grayson as Robin — but Dark Victory makes the story absolutely poignant in the book’s wider context. 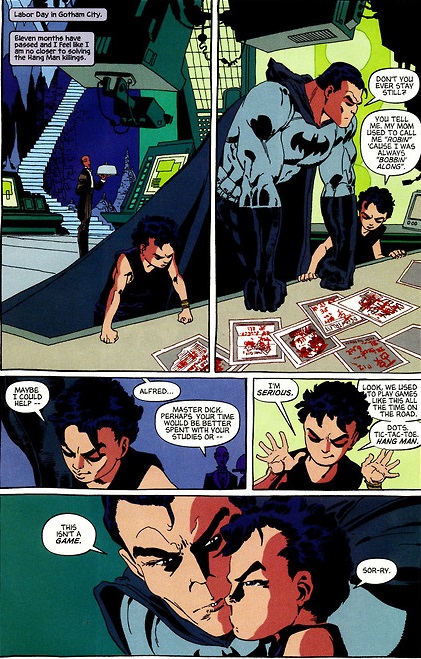 In the end, Dick takes the initiative and runs to Batman’s rescue, dressed in a cape and the performing colors his parents wore. He’s ready to aid his mentor after their training together. As Alfred points out, Batman never would have called on the kid for help… but once Batman sees Robin in action, he recognizes the danger in solitude and his need for others. (In other words, the kid just saved his ass.) The book finishes with the duo ready for action.

I read Dark Victory in less than two days, so my only regret is that I didn’t read Long Halloween first! This is also the first graphic novel to really draw me in, to the point where I could not put this book down. What attracted me most was not so much the main crime mystery plot — though it was fantastic — but the personal relationships and inner struggles of the characters. Of course, we get that in many novels, graphic or otherwise, but for me, this is the first comic book to really spark my emotional side.

Being new to comics, this is the first that I devoured in just a couple of days. It’s gripping enough that I imagine it would even appeal to others who, like me, don’t typically read a lot of comics.

I will go back and read Long Halloween at some point, but next on my list is the so-called Demon trilogy to learn more about my favorite Batman villain, Ra’s al Ghul… And if anyone has other comic book recommendations for me, please share!

4 thoughts on ““Batman: Dark Victory” — the first graphic novel I could not put down”