I love video games, but in addition to the occasional rage quit, I sometimes find that playing video games makes me tense. A chill-out session somehow escalates over the course of a couple of hours to leave me with sweaty palms and an accelerated heart rate. Some people may find that fun, but I just feel on edge.

Sometimes the games that do this to me feature over-the-top immersion — a fantastic thing, but incredibly intense when realistic enemies are whacking away at my health bar for hours on end. Other times, the games are just really, really difficult. And for games whose reputations of being ridiculously impossible precede them, I sweat just thinking about them and often refuse to play them at all.

It’s partly a personal thing. I have never been a competitive person. And while leveling up can become a bit of an obsession with some games, the challenge aspect of games — beating my previous score, taking down an optional boss — is never a priority for me. I avoid confrontation in games when possible. Stealth and ranged combat are my favorite things, because it feels less stressful when a.) I can sneak past an enemy to avoid combat entirely, and b.) I don’t have an enemy standing face-to-face with my avatar trying to strike her down. (Really, I’d like to get into more turn-based games just to have a chance to take a breath and think my way through the game.)

I’ve also never been one for stress. Some people are adrenaline junkies, but roller coasters and horror films are (usually) not for me. In a way, action-packed video games that force you to think fast, dodge attacks and take down enemies before the frustrating “GAME OVER” screen appears are meant to thrill you with adrenaline.

In fact, a clinic has reported that computer games spark a “fight or flight” response in players — specifically, an adrenaline rush — which causes the adrenaline to build up in the body since no real action is taken. (Kicking ass in a game doesn’t actually release the body’s real adrenaline.) This makes a lot of sense to me. I can’t believe that playing video games will lead to an anxiety disorder or anything like that, but it does explain the frazzled feeling I have after a virtual shooting session. (Unfortunately, this information was reported by the British tabloid The Sun and is mysteriously lacking in detail… but it’s an interesting theory nonetheless.)

When Games Are Good For You 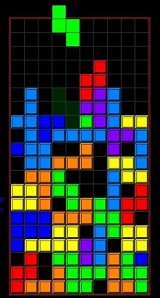 On the other hand, a study by Texas A&M International University professor Dr. Christopher J. Ferguson found that the long-term playing of violent video games can help adults feel less hostile and depressed after stressful or frustrating tasks. What’s even more interesting — and makes a lot more sense, to me — is an East Carolina University study that found physical stress levels reduced after playing Bejeweled 2. The same has been said of playing Tetris, which helps people suffering from post-traumatic stress disorder by essentially keeping their minds too occupied to visualize past negative events (flashbacks). And it’s these non-violent games that really seem capable of allowing the mind to unwind, in my opinion.

Lately, when I feel overwhelmed with stress from either intense video games or life in general, I pick up a puzzle game. I’ve never been big on playing games on my mobile  phone — the small screen and tiny buttons are mostly to blame — but finding a game of Tetris on the Internet is a pleasure at the end of a long day. It reminds me of when creative people say that they get their best ideas doing mundane tasks, such as washing the dishes or taking a shower. There’s something relieving about keeping your hands, eyes and brain busy so your unconscious mind can work things out.

Obviously, there is a minor frustration factor with games like Limbo and Portal when you get stuck on a tricky puzzle. But Trine 2 offers hints — you can even bring the hints on sooner, on a low-patience sort of day — and of course Tetris lets you start again and again and again.

Why I’m Into Waveform

This week I started a new puzzler that I highly recommend. Created by Eden Industries, it’s called Waveform, and like many other games of its kind, it lets you replay each level to beat your past score. Even when you only reach 30% completion or receive some other abysmal score (like I did at first), the game is encouraging and a blast to play.

Waveform has a story — something to do with saving light in space — but you’d barely know it from playing. The retro-style gameplay is obviously where the game shines. Your ball is the hero, moving along a light wave that you control. By moving your cursor up and down and side to side, you lengthen or shorten — or tighten, or loosen — the wave. Your goal is to catch the little orbs of light along the way, which requires careful shifting of the light wave.

To make things trickier, tightening the waves speeds up the ball, and you’ll need to avoid mines (among other things) in your path. Bouncing or spinning light rings are moving targets that are hard to hit. You can also slide along rings and whirl through exit portals for more achievements. And in later levels, the waves get funky, the ball bounces off mirrors, mines are on the move and Waveform’s complexity becomes evident even as the game mechanics remain deceptively simple.

Beyond the gameplay, the game’s glossy appearance and fitting, retro-style soundtrack — full of old-fashioned arcade noises that add personality to the music — make Waveform a pleasure to play. The game mechanics are so easy, there’s no tutorial, but it’s a challenge to get a perfect score and earn all the achievements. What I like most about it is how forgiving it is as it scrolls along, helping you forget what light particles you missed and concentrate on what’s ahead.

So, when I need a break from life, I tend to turn to video games for much-needed escapism. But when I need a break not only from life but also from the occasional bout of in-game stress, I zone out with a puzzle game like Waveform. For me at least, it’s nice to know that so many games exist to suit so many different moods.

10 thoughts on “When Video Games Stress Me Out”